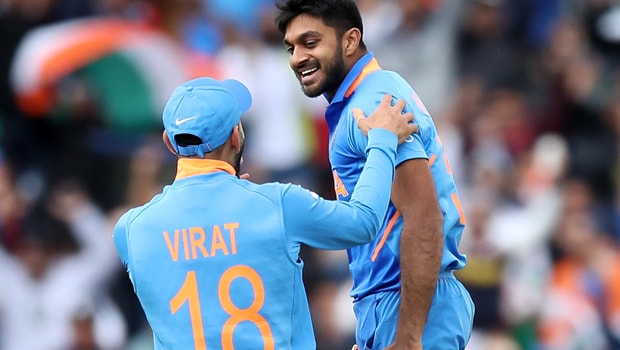 Indian all-rounder Vijay Shankar has played down comparisons with Hardik Pandya. Shankar believes it is crucial for him to focus on his own performances rather than think about the comparisons. The Tamil Nadu player feels he needs to make the most of his opportunities which he gets rather than worry about other player’s renditions.

Shankar believes if he can make a name for himself after performing well in the crunch matches, he would create his own place in the side. The all-rounder is aware that Hardik Pandya will be the team’s first choice player and he has to make the most of his limited chances to cement his place in the side.

Meanwhile, Vijay Shankar was part of the World Cup squad but ankle injury had ruled him out of the ODI showpiece. Subsequently, he was not picked in the team after the conclusion of the World Cup. In fact, Shankar’s selection in the World Cup had drawn criticism from all corners as he didn’t have experience under his belt.

Shankar scored 58 runs in three innings whereas he scalped two wickets in one inning he bowled in the World Cup before he was ruled out.

“If it starts affecting me (that Hardik is the No 1 choice) then I will lose out on games that I have with me. If I focus on the games that I have and have match-winning performances, then my name will be there in the circuit (reckoning),” Vijay told PTI during an interview.

“If I perform, people will talk about me and if some opportunity arises, I will be getting into the Indian side. So I can’t think about what other players are doing,” said Vijay.

Vijay Shankar has thus far played 12 ODIs and nine T20Is in which he has scored 223 and 101 respectively. The medium pacer has also scalped nine wickets in his International career.

Thus, Shankar will have to come up with consistent performances in the domestic circuit to knock on the selection doors. The right-hander has an average of 44.84 in first-class cricket whereas he scores 38.10 runs in every List A game.

Shankar had shown nervousness in the Nidahas Trophy final against Bangladesh but Dinesh Karthik had rescued the team. There is no doubt that the Tamil Nadu all-rounder has shown an upward swing in his improvement graph since then.

Shankar has grown in confidence after he played some crucial knocks for India A on the tour of New Zealand under the tutelage of Rahul Dravid. Hence, he would need to come up with better performances to once again earn back his place in the side.