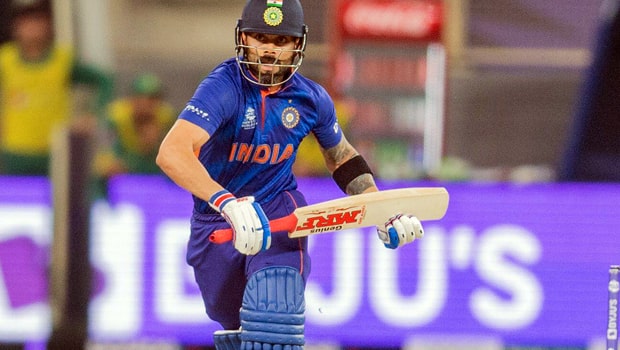 Indian Test captain Virat Kohli’s frustrations with the bat has found another chapter with Kohli getting out to a ridiculously loose Lungi Ngidi delivery on Day 1 of the Test against South Africa. During his two-hour stay at the crease, Kohli looked patient and calculative. He showed immense grit and resilience in the early part of his innings and seemed to be in solid touch.

However, a momentary loss of concentration let him down. South Africa built up pressure by bowling consecutive dots to Kohli and Rahul. The Indian skipper was finally dismissed on 35 after trying to chase Lungi Ngidi’s wide of off-stump delivery and getting a nick on it.

The worst part about his dismissal is that there was no reason for Kohli to play at that delivery. His reckless cover drive attempt didn’t come off and it ended up making him look foolish. Speaking on his YouTube podcast Khelneeti, Saba Karim dissected Kohli’s dismissals at crucial junctures.

“He (Kohli), over the years, has been a dominant and an authoritative batter. And we haven’t seen that characteristic of his since last 2-3 years. Though, he has to ponder over his shot selection. When he’s moving past the initial period, he feels that this is the moment to score a big one. And that’s when he’s getting out. And I feel that this may be a worrying factor and he has to work on this.”

Karim also mentioned that Kohli might find help from new head coach Rahul Dravid. Dravid is one of the most accomplished batsmen in the history of Test cricket and his excellent technique stood out quite clearly.

“Virat will definitely now have to discuss with Dravid regarding how he can stimulate situations, how he practice against different kinds of bowlers,” he added.

The wait for Virat Kohli’s 71st ton gets longer and longer. The 33-year-old hasn’t scored a century in 28 months and after failing to convert yet another start, fans of Indian cricket are getting more impatient. Kohli has also been dismissed 22 times between scores of 10 and 49 in his Test career.

Saba Karim feels that Kohli needs to put a check on his attacking instincts and try to dig in during tough periods of bowling spells. “The stats would’ve been hurting Virat Kohli a lot. Any batter can get dismissed below 10 runs which means he’s not set yet. However, if a player is getting out after scoring 10+ runs, means he has settled. And a player like Virat Kohli, who has scored numerous tons in his prime form, he isn’t able to do that now. It now depends on how he curbs his attacking instincts in order to get past his ongoing lean phase,” he concluded.