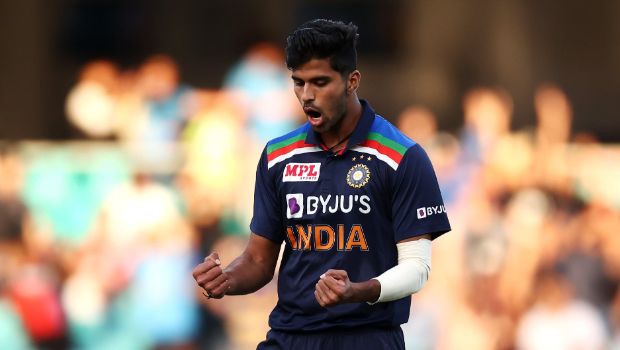 Royal Challengers Bangalore all-rounder Washington Sundar has been ruled out of the second phase of the Indian Premier League, which will be played in the UAE from September 19.

The franchise has named Akash Deep, the medium pacer from Bengal, as the replacement for the off-spinner.

Deep has also been a net bowler with RCB. Meanwhile, Washington Sundar had suffered a finger injury during the warm-up match between County Select XI and the Indians before the Test series against England.

Sundar was batting for County Select XI and he was hit on the finger by a bumper from Mohammed Siraj and thus he was ruled out of the five-match series and returned back to India. Sundar was training at the NCA but he won’t be able to recuperate on time for the IPL.

The off-spinner is well known to bowl economically in the powerplay overs and Yuzvendra Chahal and Wanindu Hasaranga will need to fill Sundar’s shoes.

“Royal Challengers Bangalore’s all-rounder Washington Sundar has been ruled out of the remainder of the IPL 2021 due to a finger injury. Akash Deep, a state cricketer from Bengal and net bowler with the franchise has been named as replacement,” RCB said in a release.

On the other hand, Akash Deep made his T20 debut for Bengal in 2019. The medium has scalped 21 wickets at an average of 16.35 at the domestic level. Deep’s best bowling performance came against Hyderabad in the Syed Mushtaq Ali trophy when he bagged 4-35.