Home » Cricket » We don’t think of winning a Test match here and there: Virat Kohli on team’s approach on away tours

We don’t think of winning a Test match here and there: Virat Kohli on team’s approach on away tours 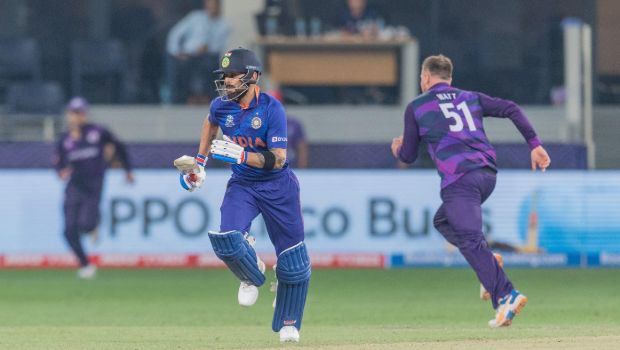 Indian captain Virat Kohli has stated they don’t think of winning an odd Test match here and there in the away tours.

Team India has significantly improved their performances in the foreign conditions under the leadership of Virat Kohli in the Test format.

India has twice won against Australia in Australia and they have been able to come up with their best. Furthermore, the Virat Kohli-led team had taken a 2-1 lead against England in the four-Test matches that were played.

Thus, India has ticked the right boxes while playing in challenging overseas conditions and a lot of credit goes to Kohli’s aggressive captaincy. Moreover, India’s pace battery has played a key role in India’s success in overseas conditions.

Meanwhile, India has never savored success in the South African conditions and as the Proteas doesn’t have a formidable unit, the visitors will have a good chance to create history.

Virat Kohli told the press: “We can take a lot of motivation from that, of course. We probably won in the toughest conditions on that tour so that should give us a lot of confidence that if we have the right mindset and we start off a series with a lot of confidence and belief, we can definitely stand up to any challenge that comes up our way and takes heart from it.”

He added: “South Africa is one place where we haven’t won a series yet and we are very motivated to do that. And the mindset is to go out there and win a series in any country that we play. We don’t anymore think of winning a Test match here and there and we’ll do our absolute best that we can as a team to make sure we keep contributing towards that cause.”

Kohli admitted that the team has been a bit sloppy in the past when some of the sessions have gone horribly wrong for the team. However, Kohli feels the team has improved their performances by gaining experience in tough conditions.

Virat Kohli explained: “[We have] left ourselves a bit too much to do at a certain time when sessions have gone very bad when they have gone bad. It is something we have controlled nicely in the recent past with more experience and the guys understanding how to play in these conditions against which bowlers and how to transition their innings through the day so they can bat long. I think we are very well placed in terms of experience and belief and confidence that this time around we can do something special and get the results we want as a team and overcome probably the toughest condition to go and win a series in. ”

India will look to tick the right boxes in the upcoming Test series against South Africa. The first Test match will be played at Centurion from December 26.