Home » Cricket » We have an amazing opportunity to restrict England to a low score: Shardul Thakur

We have an amazing opportunity to restrict England to a low score: Shardul Thakur 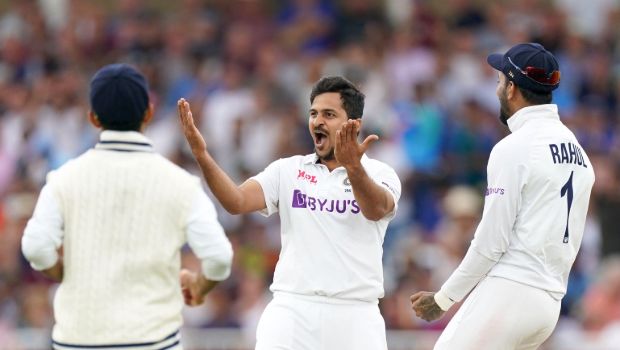 India’s all-rounder Shardul Thakur feels they have a good chance to restrict England to a low score.

The visitors were able to take the big wicket of Joe Root as Umesh Yadav got the ball to jab back into the right-hander to hit the top of the off-stump. India could only manage 191 runs after they were put into by the England captain.

In fact, the tourists were reeling at 127-7 at one stage however Shardul Thakur was able to play a blistering knock of 57 runs off just 36 balls to help his team go past the 190-run mark. Thakur brought his fifty off just 32 balls with a massive six and scored the fastest fifty for an Indian batsman in English conditions.

Meanwhile, Jasprit Bumrah provided the early breakthroughs when he dismissed Rory Burns and Haseeb Hameed in the same over. England is 53-3 and the visitors will have a great chance to dismiss the hosts cheaply as they have got the big wicket of Joe Root.

Shardul Thakur said while talking in the virtual press conference, “See, if you see our total, it’s not very high, just around the 200-run mark. So, keeping England’s first-innings total under control is the key. And if you see they have already lost three wickets. Their in-form batsman Joe Root is out. So, we have an amazing opportunity to restrict them to a low total so that we keep ourselves in the game and it goes on neck to neck”.

Meanwhile, Thakur admitted that the ball swung less in the third session as compared to the morning session. The ground was covered by dark clouds and the England bowlers were able to make the most of the conditions after Joe Root won the toss and decided to bowl first.

“I think the bounce was the same, but it swung a little less than what it was swinging in the morning. I believe there’s something to do with the clouds, whenever it’s cloudy, it swings or it appears as such,”

Thakur’s knock of 57 runs was much-needed for the visitors as India could have been bowled out for under 150 if he had not scored the crucial runs. The tourists will aim to get the remaining seven England wickets early and put themselves in front.