Home » Cricket » We weren’t brave enough with the bat or ball against New Zealand: Virat Kohli

We weren’t brave enough with the bat or ball against New Zealand: Virat Kohli 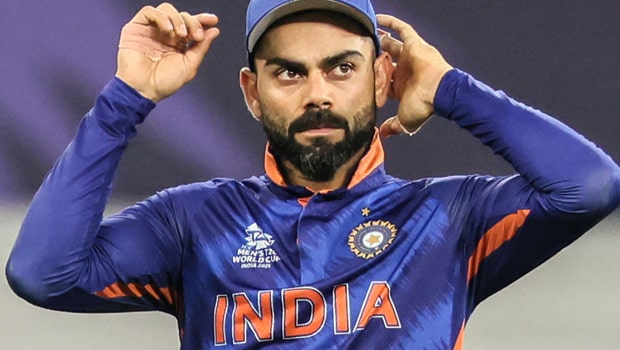 Despite playing just two matches in the T20 World Cup, India are staring at an early elimination from the competition. They have lost both their matches against Pakistan and New Zealand in embarrassing manners and not only do they now depend on other teams dropping points, but will also require massive NRR boosts to have any hopes of making it out of the group stages. In all practicality, it seems too distant a dream right now.

India were impotent with the bat once again against New Zealand and managed to crawl their way to 110 inside 20 overs. The only positive with the ball this time around was that at least the unit didn’t go wicketless. Two wickets are all they have to show for their efforts in this year’s T20 World Cup so far.

“Quite bizarre. To be very honest and brutal up front, I don’t think we were brave enough with bat or ball,” Kohli told the host broadcaster during the post-match presentation. “With the ball, I mean, obviously we didn’t have much to play with, but we were just not brave enough with our body language when we entered the field, and New Zealand had better intensity, better body language, and they created pressure on us from the first over onwards, really, and continued that through the innings.

“Every time we felt like we want to take a chance [while batting], we lost a wicket. That happens in T20 cricket, but that’s most probably or most often the result of that little bit of hesitation with the bat, when you feel like should you go for the shot or not,” captain Virat Kohli summed it up best.

Playing for Team India, who are almost always the favourites ahead of any big tournament comes with a certain kind of pressure that they players have to accept at some point. The players were put under the grinder following their first World Cup defeat to Pakistan nearly a week ago. This time, the backlash could be worse given the situation they find themselves in.

“When you play for the Indian cricket team, you obviously have a lot of expectations, everyone knows that – not only from the fans but from the players themselves.

“Wherever we play, we are watched, people come to the stadiums to support us, so there’s always going to be more with our games, that’s always been the case, and we’ve embraced it over the years, and everyone who plays for the Indian team obviously has to embrace that as well, and learn how to cope with it. And when you cope with that as a team, you tend to overcome that pressure and those tough situations. And we haven’t, in these two games, and that’s why we haven’t won,” concluded Virat Kohli.