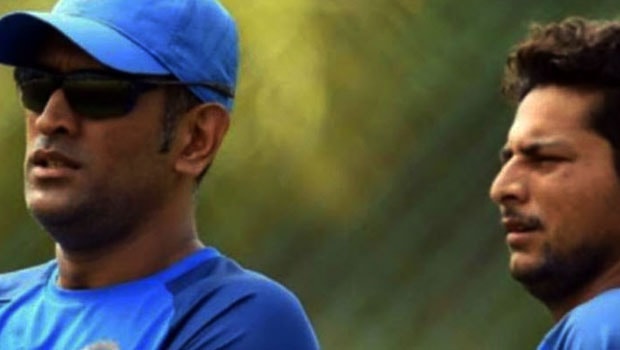 When a veteran like MS Dhoni calls out a few pointers, you should just blindly follow it especially when you are a rookie. However, Kuldeep Yadav had to pay the price when he didn’t pay heed to Dhoni’s instructions. Yadav recalled an instance when he was hit over the covers for four by Sri Lanka’s southpaw batsman Kusal Perera in the Indore T20I.

Subsequently, MS Dhoni, who mostly knows what the batsman is trying to do, suggested Kuldeep to change the field and keep three fielders on the off-side. But Kuldeep could not hear the golden words and decided to carry on with the same field.

On the next ball, Kuldeep was hit for another four when Perera reversed swept him. As expected, Dhoni came charging in and scolded the Uttar Pradesh spinner for not listening to him. Dhoni asserted that he has played more than 300 ODI matches and has all the experience under his belt.

“Kusal (Perera) smashed a boundary over the covers. Dhoni Bhai shouted from behind the wickets and asked me to change the fielding. I did not listen to his suggestion and in the next ball, Kusal hit another boundary through the reverse sweep now,” the 24-year-old chinaman said while talking to Jatin Sapru on Instagram.

“Now agitated Dhoni came to me and said, ‘me pagal hu? 300 one-day khela hu, aur samjha raha hu yahan pe.’ (Am I mad? I have played 300 ODIs and you are not listening to me),” he further recalled.

In fact, there is one more incident when Dhoni had pulled Kuldeep’s leg. The chinaman was taking a lot of time in setting up his field in an Asia Cup fixture and Dhoni shouted, ‘Ball dalega ya bowler change krun’ (Will you bowl or should I change the bowler?).

MS Dhoni has been a great guiding light for the youngsters and he was a mastermind at work when he used to keep the wickets, especially for the spinners. Dhoni was mostly successful in gauging the batsman’s next move and he will let his bowler know what the batter is trying to do.

Meanwhile, it was a one-off incident in which Dhoni lost his cool. The former Indian skipper generally wears a composed head on his shoulders, which has helped him in taking the best decisions for Indian cricket. Dhoni was known to get the best out of his players and his sedate approach helped him in reaching new heights.