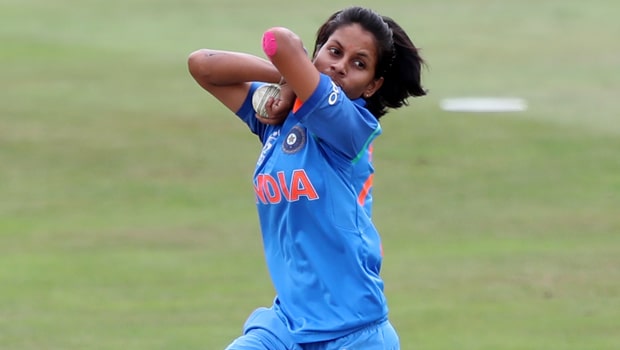 Indian Spinner Poonam Yadav continued from where she stopped against Australia by claiming additional three wickets to help India defeated Bangladesh by 18 runs in a Group A match of the ICC Women’s T20 World Cup.

After Bangladesh won the toss, India was invited to bat and they ended up posting a competitive 142 for 6. While fielding, they restricted Bangladesh to 124 for 8 to get their second successive win in the showpiece event in Australia on Monday.

With a target of 143 to win India, Murshida Khatun gathered 26 runs off 30 balls after Shikha Pandey removed her opening partner Shamima Sultana in the second over.

After Khatun was sent packing by Arundhati Reddy, Nigar Sultana (35) tried to keep their hope alive in the hunt for the target but Bangladesh met another quality spin bowling from Poonam Yadav, who removed three of their batswoman and derailed their chase.

Efforts of Poonam was complemented by Arundhati Reddy (2/33) and Pandey (2/14) who shared two wickets each, while Rajeshwari Gayakwad (1/25) had one wicket.

While batting, India got a good start from 16-year-old opener Shafali Verma, who smashed a 39 from 17 balls. Her records include two fours and four sixes.

She was eventually sent packing while trying to get another boundary from the delivery of veteran Panna Ghosh but her bal was caught by wicket-keeper Shamima Sultana.

Jemimah Rodrigues also helped the team’s aim by scoring a crucial 37-ball 34. Apart from , Veda Krishnamurthy who also produved 20 runs off 11 balls that included four boundaries to lift them to a fighting total,  the rest of the batters failed to live up to expectation, making India’s run rate to take a hit.

The secret behind India’s exploit is purely the works of their bowlers who restricted their opponents’ runs.

One thing that has been noted in the India team is that their innings usually lack the needed impetuous each time the 16-year-old opener is out.

This means that in game she failed to get her rhythm of time, India could be staring at defeat if the other batswomen fail to lift their games.