You will always be my captain MS Dhoni, says emotional Virat Kohli 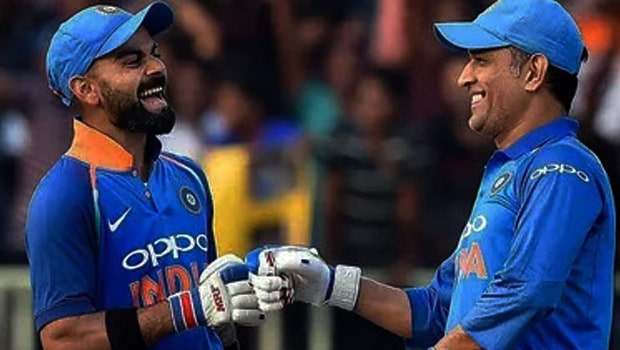 The Indian captain Virat Kohli gave his tribute to his predecessor, MS Dhoni, who announced his International retirement on Saturday. Dhoni took to his Instagram handle to let his followers know that he is hanging his boots from International cricket. Subsequently, the wishes started to pour in for the wicket-keeper batsman.

Virat Kohli also joined the list of admirers as he stated that Dhoni will always be his captain. Kohli had made his International debut under the captaincy of MS Dhoni. In fact, Dhoni had backed Kohli when he was struggling to get going on the England tour in 2014.

Kohli added that Dhoni is a leader a youngster wants to have in his career. The former Indian captain was able to get the best out of the young players and gave them the ample opportunities to prove their mettle.

Kohli was able to observe Dhoni’s journey from close corners and learned a lot from him. In fact, Kohli recently stated that Dhoni played a huge role in handing over the captaincy to him. Dhoni passed on the limited-overs captaincy baton to Virat Kohli in January 2017.

Meanwhile, Virat Kohli and MS Dhoni share a great camaraderie with each other. Kohli also added he loved batting with Dhoni as both of them are fast runners between the wickets.

Kohli tweeted: “Thanks for always being the leader a youngster wants to have around him. You’ll always be my captain @msdhoni Bhai”.

On the other hand, Dhoni was able to tick the right boxes as a wicket-keeper, as a finisher and as a captain. He led India to glory in the T20 World Cup in 2007 and also took the team to triumph in the 2011 World Cup. Furthermore, he was able to add the 2013 Champions Trophy to his impressive cabinet.

The right-hander will be seen in action while leading Chennai Super Kings in the upcoming Indian Premier League, which will kick off from September 19.