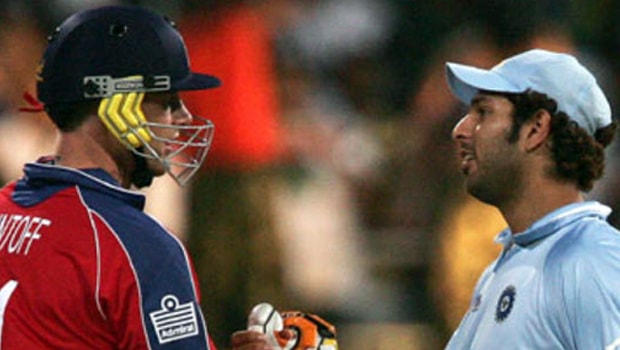 The former Indian batsman Yuvraj Singh recalled the heated argument with England all-rounder Andrew Flintoff, which ignited the fire in him. Yuvraj then took out his anger on a young Stuart Broad and we all know what went after that. The left-hander deposited the lanky pacer for six sixes in an over and gave a perfect reply to Flintoff.

The southpaw brought up his fifty off just 12 balls, which is the fastest half-century in International cricket. Yuvraj had an argument with Flintoff after the English all-rounder had few words to say to the Indian. The left-hander had hit Flintoff for a boundary and the all-rounder said that it was a ‘dash shot’.

Furthermore, Flintoff threatened Yuvraj that he will cut his throat. Consequently, Yuvraj was full of anger and took apart Stuart Broad. In fact, Yuvraj smashed Flintoff for one more six before getting out.

The left-hander scored 58 off just 16 balls as he scored seven sixes and three fours in his blistering knock.

Earlier, England’s all-rounder Dimitri Mascarenas had smashed Yuvraj Singh for five sixes in an over and thus Yuvraj was able to get his revenge.

“I think Freddie bowled two good balls and he bowled a yorker which I managed to hit for a boundary. Then he told me that this was a dash shot, he got pretty elaborative. He said I am gonna cut your throat off and then I replied saying you see this bat in my hand? You know where I am gonna hit you with this bat? I remember I was so angry when I hit Broadie for six sixes, I looked at Dimitri Mascarenas and then I looked at Freddie,” Yuvraj told Kevin Pietersen on Instagram live.

The left-hander’s 58 had helped India post a challenging total of 218 runs after 20 overs. In fact, England was also able to get to 200 and thus Yuvraj’s knock was the difference between the two sides.

Yuvraj was at his best in the 2007 World T20 as he had smashed 70 runs off just 30 balls in the semi-final clash against Australia. The southpaw was known to get the best out of himself in the big matches. Yuvraj never shied away from taking on the opposition and he loved taking the bull by its horns.