Safia Chalkoo: The cadence to women’s cricket in Kashmir 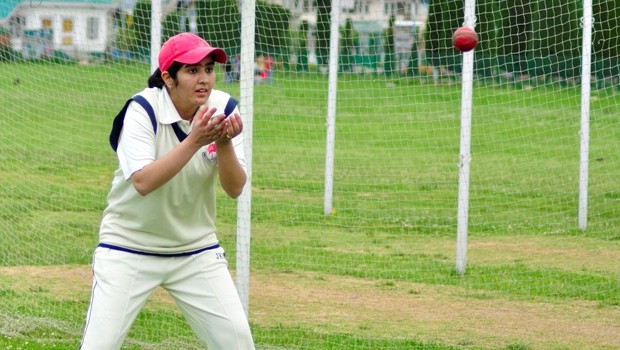 The picturesque Shaukat Ali stadium in Kashmir’s Baramulla district is an hour’s drive from Srinagar on National Highway IA, past the orchards, past the paddy fields that are abodes of cricket for the surrounding villages. Part of the Government Boys Degree College and maintained by the department of youth services and sports, the stadium is surrounded by poplar trees – in fall, the chinars, like in much of Kashmir, are a blanket of russet and gold – while to its west is a paramilitary camp.

Early mornings find swarms of joggers and grazing sheep on its periphery. Later in the day, it plays host to groups of students – enjoying lunch, thumping a cricket ball around, or in the middle of a game of football or hockey, having borrowed equipment from the sports block. The matting wicket, prepared in 1970 for around INR 600, rarely stays covered under waterproof tarpaulin. The heavy pitch roller, used twice a week, is near six practice wickets – a seat for two friends, perhaps meeting after a while. A white cloth over iron bars is the sight screen at the road and hill end.

The historic ground witnessed the goodwill football series between the famous Mohammedan Sporting Club, Kolkata, and the Jammu and Kashmir side in 2012, which J&K won 2–0. Another exhibition cricket match last year included India international Suresh Raina, who has his roots in Srinagar’s Rainawari.

It is here that now married Safia Ashraf Chalkoo learned the nuances of the game in her childhood.

As a young girl, Safia didn’t wish for dolls or toys; her dream was to score runs at home and on muddy maidans. She had chosen a bat and ball, to play with the boys at the Shaukat Ali ground and on the streets of her hometown. She even dressed like one of the boys. During winters, she used to hang a ball from the ceiling of her room, practising her batting for hours.

With a passion for the game and being a staunch follower of it, be it on television or at the ground, she stood firm in her decision to make a career out of her dream despite the social stigma. After all that hard work, she became the only girl from north Kashmir to represent J&K’s women’s team and North Zone, and an inspiration to the girls of the area.

Once wearing cricket flannels, protective gear and accessories, and now donning a headscarf with a broad smile on her face, Safia, 33, is now an employee in J&K Bank after completing her post-graduation in finance from Kashmir University in 2011. A fan of Rahul Dravid, she talks about her cricket journey, her lessons and love for the game, and the profitable transformation it has undergone.

“When I used to put on a cricket uniform, my attitude was totally different. I used to talk and walk boldly,” she says, reminiscing.

In her time, she used to be the only girl in the local boys team. She played around 30 matches every year as a batter, including local, state and national ones. She led her school, college and university team too. At St Joseph’s School, Baramulla, her friends called her ‘Afridi’.

“Even now when I meet my old schoolmates or a teacher, they will only talk about my cricket!”

One of Safia’s big inspirations was her elder brother, Mudasir Chalkoo, who played for Baramulla Cricket Club and made his name thanks to his impeccable concentration while playing. As a ten-year-old, Safia used to accompany her brother and practised with him in their backyard.

“I had the intention to play cricket right from the beginning. I always loved seeing my brother playing. I was so impressed to see the trophies in his room and I wished I too had the same … He [Mudasir] had been my mentor and I owe him a lot,” she says in a room decorated with mementos.

“My brother has been the best coach I could ever get. I learnt all the basic techniques from him. He is the one who taught me how to grip the bat, hold the ball and pose footwork. His patience and cool-minded approach toward game always inspired me.”

Support, she says, came from her family.

“My whole family has been very passionate about cricket, right from my grandfather to my dad to my elder brother and me. Cricket is in our genes, we can’t betray it,” she laughs.

In fact, she now passes on her knowledge of the game to the next generation in her nephew.

After joining university, Safia was lucky to meet the only qualified female cricket coach of the valley, the young, dynamic Sakeena Akhter.

“It’s domestic level cricket that paves the way for higher levels … You only need to polish your skills to improve more and more to become a tough opponent,” says Safia.

Her best performance came against Punjab. “I can’t forget the final match against a very strong Punjab team in the North Zone inter-state tournament in which I scored a half-century. It was a fabulous and highly appreciated innings. My best performance won us the match and I was declared woman of the match.”

All this time, she was breaking social taboos, proving wrong the conservatives who saw cricket – all sports in fact – as not something for girls. Safia believed in her talent and didn’t shy away from the ‘gentleman’s game’.

“At times, passers-by passed lewd comments when I was playing with the boys,” she says, going on to demonstrate her courage. “People were never important to me. It was only cricket that mattered. Girls were teased for playing a male dominated game, but that could never dent my morale.”

It is a subject that is close to her heart. “The society we are living in needs to change its mindset. Ours is an orthodox mentality; that makes us lag behind,” she says.

“A lot has to be done. To start with the school level would strengthen the plinth of this game. Nobody from school, college or university ever encouraged me to play cricket, but it was my passion that kept me going. I have played with girls who belong to remote areas having no financial support.”

With women’s cricket not enjoying the fan following of the men’s game, and the women playing fewer matches, the challenge for the players is considerable. Fortunately however, Safia sees things changing.

“Now you can see the talent coming from far flung areas like Kokernag, here in south Kashmir and other remote areas.” Proper vision, direction and positive approach of the J&K cricket association will help, she says.

“There lies no space for seeing the girl as the ugliest of creatures, it can only happen to immature minds,” she argues. Society’s “inferiority complex” fails to “bridge the gap between the two opposite sexes, who can do wonders in their respective fields after practice.”

In an effort to contribute to the sport, Safia did her level A coaching course conducted by BCCI in 2009, and was appointed selector of J&K Cricket Association for two years. To become a successful coach, one should have love and passion for cricket,” she says.

And that passion, she has in plenty.

“You learn to shoulder responsibilities. Even now after being in a job, I am very passionate about the game and I play cricket at times.”

This is an exclusive Dafanews interview conducted by Tahir Ibn Manzoor