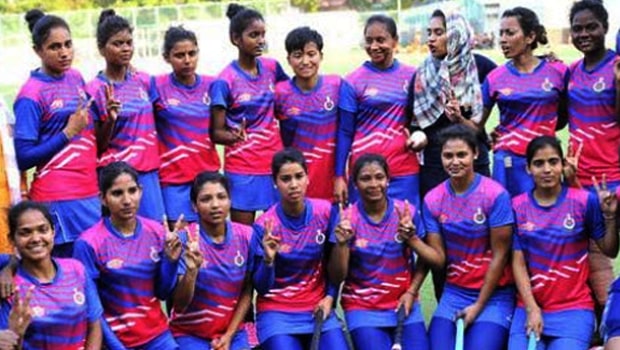 Sashastra Seema Bal became winners in the final of 10th Hockey India Senior Women Championship in the 2020 division after they defeated Steel Plant Sports Board 3-1 in a shootout on Saturday with a levelled score of 1-1 after the regulated time.

The final was a difficult affair which saw both teams score a goal at the piece in regular time.

The Steel Plant Sports drew the first blood in the 18th minute after Kumari Shailja Gautam put her team ahead. As the game drew into halfway through the third-quarter, Ranjita Mini drew her team level to restore parity as they ( Sashastra Seema Bal) levelled up in the 38th minute which drags the match into penalty shootouts.

The Penalty Shootout began as Sashastra Seema Bal scored three of their four attempts as Steel Sports Board scored just one out for the four efforts they had a goal.

Manisha was the first to take the first attempt for Sashastra Seema Bal as she sent Goalkeeper Nisha Yadav the wrong way.

However, Savita failed to score in her first penalty attempt to give her side ( Steel Plants Sports Board) the lead.

In the struggle for third and fourth place, UCO Bank Women’s Hockey Academy ended the tournament on a high note as they defeated Bengaluru Hockey Association by ten goals to nothing with Priya scoring four goals in that game as Pooja and Chanchal got a brace respectively before Monisha and Kajal completed the rout.