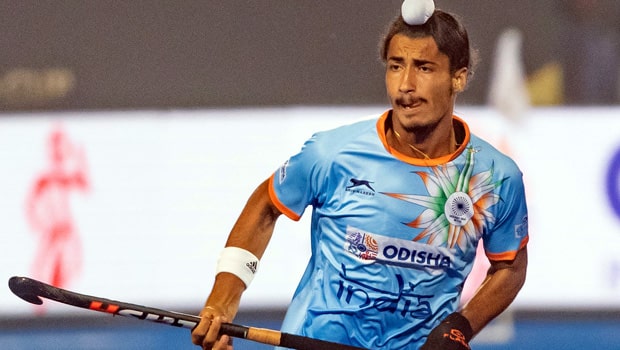 After only managing a 2-2 draw against South Korea, the Indian Men’s hockey team hammered Bangladesh 9-0 in their second Asian Champions Trophy fixture at the Maulana Bhasani Hockey Stadium on Wednesday. Dilpreet Singh was the star of the show as he recorded a splendid hat-trick to hand the Men in Blue their first win in this tournament.

Dilpreet broke the deadlock in the 12th minute followed by a goal in the 22nd minute. he completed his hattrick in the 44th minute to put the Bangladesh team under immense pressure. Jarmanpreet Singh notched up a brace with goals in the 31st and 43rd minute whereas Akashdeep Singh, Mandeep Mor and Harmanpreet Singh also scored a goal each to finish the humiliation of the hosts.

Indian earned eight penalty corners in the first quarter but the Bangladeshi defenders defended really well. Their first rushers were really on point. However captain Manpreet Singh worked out a great move to help Dilpreet Singh break the deadlock handing India the 1-0 lead. Dilpreet doubled India’s lead in the 22nd minute whereas Lalit Upadhyay scored the third from deflection via Harmanpreet Singh’s drag-flick. Indian headed into the break with a handsome 3-0 lead over Bangladesh.

During the break head coach, Graham Reid suggested the Men in Blue to try out variations in attack and that paid dividends. The Men in Blues tried different strategies in attack and kept on scoring goals against their comparatively weaker opponents. There were variations in penalty corners aswell and that yielded results for India. Both Harmanpreet and Jarmanpreet led the penalty corner attack and helped India increase the lead in the game.  The duo helped in taking India’s lead to a formidable 5-0 while Dilpreet scored his hat-trick in the 44th minute extending India’s lead to 6-0.

The last quarter saw Indian scoring for fun as the Bangladeshi defenders were down on morale. India  had 16 shots on goalas with 25 circle penetrations.  Speaking about their performance, Skipper Manpreet Singh said, “It was a good effort from the team and we tried different variations in this match which we had been working on during our training. I feel at the start, we couldn’t convert as Bangladesh had put up a very strong PC defence. But at half-time, Coach Graham provided important inputs on how we could improvise our attack and as you all could see we improvised as the match progressed.”

“We will go back and further analyse today’s and yesterday’s game (against Korea) and find ways to come up with a much better performance against Pakistan,” he concluded.