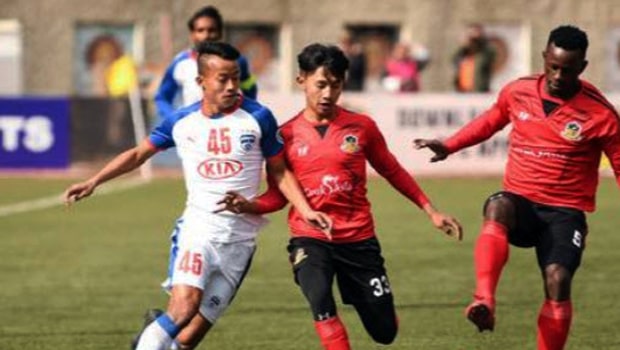 Bengaluru FC made up of youngsters on Wednesday beat Bhutanese side Paro Fc 1-0 in one of the Preliminary Round games in the AFC cup 2020 played at the Changlimithang Stadium.

The Indian side played a defensive and counter-attacking style of football from the blast of the Whistle.

Bengaluru got their very first chance of the game in the 20th minute through Spanish defender, Juanan, whose well taken free-kick was tipped over the bar by Paro’s goalkeeper.

Another Spanish defender, Nili Francisco, almost gave the Indians the lead just before the break, but his own set-piece hit the goalpost leaving the teams levelled at half time.

The Indians took the lead in the early moments of the second half as Naorem Roshan’s pass found Haokip, who found the back of the net from a tight angle.

The ever-lively Roshan, unfortunately, became an injury worry for Bengaluru FC on the hour mark as he went off for Sunil Chhetri injured.

The Indian Super League side managed to seal their defense for the next half hour and get an all-important victory with a vital away goal in the bag.

Paro FC will travel to India to face Bengaluru FC at the Kanteerava on the 12th of February for the second leg of the tie, and Bengaluru will be confident of a result enough to see them through to the group stage of the AFC Cup.

Bengaluru before then will travel to Chennaiyin FC in the India Super League on the 9th of February. The team is situated in third with 28 points from 15 games.

They scored 19 goals and conceded 9 in the process sitting five points away from Goa, who are first while ATK are second with 30 points.