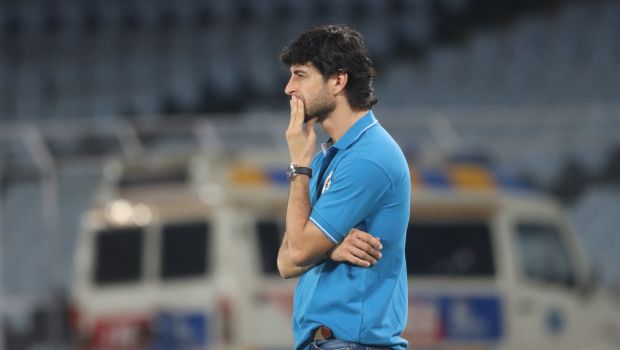 ATK Mohun Bagan head coach Juan Ferrando said his players worked as a team after they defeated Bashundhara Kings by 4-0 in the second game of the Group stages of AFC Cup 2022 at the Salt Lake Stadium, Kolkata on Saturday.

The Mariners had lost the opening game by 4-2 against I-league champions Gokulam Kerala FC.

However, Juan Ferrando’s men were able to bounce back stronger as a unit against the Bangladeshi club and brought their best to the pitch. In fact, ATK Mohun Bagan’s players had to face a lot of criticism after their loss against Gokulam Kerala FC but they were able to put it behind them.

Juan Ferrando said in the post-match press conference, “I think Bashundhara Kings are a good team and they have good players. I’m happy that supporters enjoyed the match today. The break was good for us as the team wasn’t doing well in the first ten minutes. I think after 2-0, the team played well. I’m happy because these players read a lot of negative comments in the last two days. I’m happy for them for this result because they are good players, a good team and good persons.”

Meanwhile, Liston Colaco scored a fine hat-trick for ATK Mohun Bagan whereas David Williams also scored in the 77th minute to complete a dominating win for the club. The Spaniard lauded the players for coming up with a collective effort.

He said, “I think it was a very difficult game. The team enjoyed the space they had. I think in the last match, our emotions in the second half were not so good. The players today worked like a team. They supported each other. This is more important for me. The supporters were great, They stayed back and supported us. Even after they storm, they stayed in the stands. It’s fantastic. It made me think that this is our moment.”

Ferrando said, “We play a lot of games in a short period of time. There are two reasons. First is good recovery and the second is to put trust on some players and make changes in certain positions. I trust all 26 players in my squad. Everybody can help the team. My job is to try to help them find their best moment and thereby help the team.

In the last game, we had one line-up, in this game we had another one. Against Maziya, we will have a different line-up. Roy is the captain but inside the dressing room, there are 26 captains. Inside the dressing room, the responsibility is the same for all players. Pritam is a top leader. Today you saw Sandesh Jhingan and he was a leader but he was not the captain in front of the referee but on the pitch. I’m happy for this.”

ATK Mohun Bagan will next face Maziya S&RC on 24th of May.