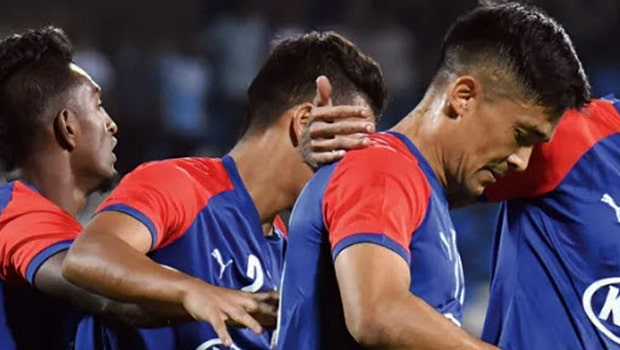 Bengaluru FC on Wednesday failed to get the needed result to go through to the next round of the AFC Cup after losing Maldives’ Maziya FC in the second leg of the qualifying playoffs at the Shree Kanteerava Stadium.

The Indians had lost the first leg in the Maldives on the 19th of February 2-1 and needed to get an outright and comprehensive victory at home.

However, Bengaluru could only manage a 2-1 in 90 minutes before a 3-2 score After extra time and a 4-4 aggregate score.

The game started slowly as both teams went into the break with a balanced 0-0 draw scoreline, but the second half started with Bengaluru going into the lead through Jamaican forward Deshorn Brown in the 58th minute.

Ibrahim Hassan equalised in the 73rd minute for the visitors to put the hosts into panic mode, but Sunil Chhetri, who would later score a brace put Bengaluru back in the lead five minutes later.

However, both teams failed to score another goal that would have ensured that the game ended in 90 minutes.

In extra time, the blues were given a huge task after the visitors scored first in the 102nd minute of extra-time through Cornelius Stewart.

Substitute Sunil Chhetri scored in the last minute of extra time through a spectacular free-kick to force the match into penalties.

The Blues missed two penalties from Rahul Bheke and Parag Srivas to down 3-4 in the penalty shootout as the Maldives side went on to the next round.

Up next for Bengaluru is the India Super League playoffs doubleheader against Atletico De Kolkota with the first leg coming up on the 1st of March at the Shree Kanteerava Stadium.

The second leg of the game will come seven days later at the Salt Lake Stadium.