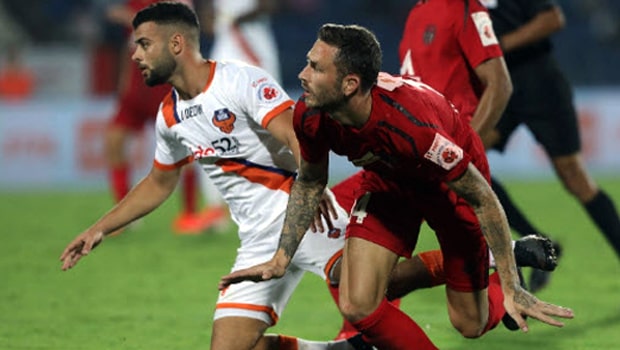 Three players– FC Goa’s Seminlen Doungel and Hugo Boumos, and North East United FC’s Kai Heerings– have been suspended for two games by the All India Football Federation (AIFF) Disciplinary Committee as they were involved in an ugly on-field brawl during an ISL match between the two aforementioned teams.

The incident took place quite late in the game when North East were leading by a 2-1 margin. Doungel didn’t like a challenge made on him and that resulted in the mass brawl. Manvir Singh eventually scored an injury-time header for Goa to draw the match 2-2.

Doungel was already sent off after the brawl and has been suspended for two more games after already missing FC Goa’s match against Mumbai City FC, which they won by a 4-2 margin. The Indian forward’s teammate Boumos will also miss the next two matches, which are against Jamshedpur FC at home and against Kerala Blasters away.

The duo will be available for selection only when the Gaurs take on Hyderabad FC away from home on December 8.

As far as North East United are concerned, their centre-back Heerings has also been suspended for being involved in the brawl. He will now miss out on playing in the home clash against Mumbai City FC and the away game against Jamshedpur. He would be available for selection once again when ATK visit their den on December 7.