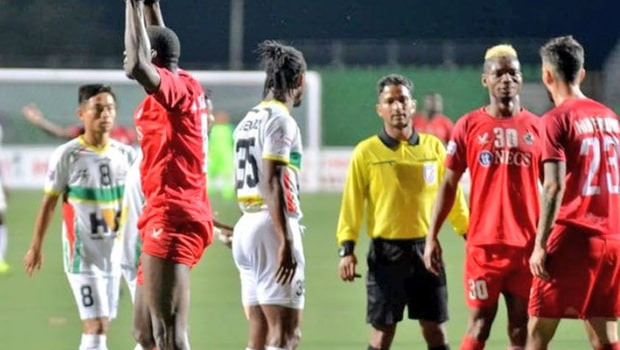 I-League action continued on Tuesday evening as two games were played at two different centers with TRAU FC losing for the second time in succession at Aizawl while there was no goal scored in a drab draw between NEROCA and Indian Arrows.

At the Rajiv Gandhi Stadium, Aizawl improved their I-League standings as their 2-0 victory, their second in two games and last five, saw them improve on their standings.

Malian forward Abdoulaye Kanoute, a 69th-minute substitute, scored twice in 12 minutes to turn the tide of the game around and condemn TRAU FC to their second loss in a row and in their last five games.

Aizawl now sits sixth on the log with 14 points with 13 goals scored and 13 goals conceded as well while TRAU FC has 15 points from 12 games scoring 12 and conceding 20 while sitted 4th.

Aizawl will be guests to Churchill Brothers next on the 15th of February, while TRAU FC will host Chennai City a day later.

In the other game played at the Khuman Lampak main stadium in Imphal NEROCA, and Indian Arrows played a 0-0 stalemate to leave both teams with an identical form guide.

NEROCA next travels to Mohun Bagan in three days while Indian Arrows will host East Bengal on the 17th of February.

Both teams have one win, three losses, and a loss each, while NEROCA thrashed TRAU FC 5-0 in their last game, India Arrows beat East Bengal 1-0 away from home.

While NEROCA sits ninth with 12 points from 12 games played with sixteen goals scored with 21 conceded, Indian Arrows are rock bottom with 8 points from 11 games with an appalling goal record of 5 scored and 12 conceded.