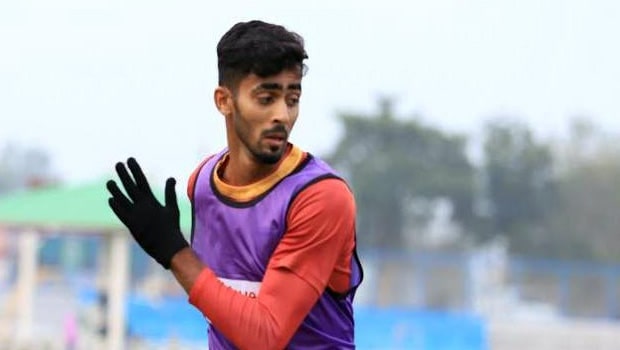 Many teams are building up for the upcoming Indian Super League season and the ISL champions Hyderabab FC are also doing their best to hold on to their best players. Therefore they have extended the deal with India international Akash Mishra. The youngster has signed a three year deal staying at the club till the end of 2024-25 season for the NIzams.

Mishra made a name for himself during his stint with the Indian Arrows in the I-League. He showed a lot of promise with his marauding runs down the right flank and his pinpoint crossing. Therefore Hyderabad FC came calling in 2020. But it was only last season when he became a breakthrough star.

The 20-year-old fullback has been one of the best performing Indian players from last season as he strengthened his defence alongwith his natural attacking instincts. He played 20 matches last season in league phase along with 3 matches in the knockout stage and scored 3 goals along with 2 assists as he helped Manolo Marquez’s men to clinch their maiden ISL trophy. They defeated Kerala Blasters in the finals on penalties.

The young defender was one of the first names on the team sheet for Manolo Marquez last season. He played more minutes than any other player in the Hyderabad FC’s yellow for the last two seasons.

Akash Mishra is excited to continue his progression at the club after playing each and every match in the club’s historic ISL winning season. “As a club, we’ve been through a lot in my two seasons here. Even before we became Champions, I have an emotional attachment to the club and it was an easy decision for me to stay,” said the youngster.

The 20-year-old had also broken into the Indian national team and this summer at the Asian Cup qualifiers, Akash Mishra became the mainstay for Igor Stimac. The Hyderabad FC fullback bombed up and down the field and played a crucial role in India’s three consecutive wins against Cambodia, Afghanistan and Hong Kong to book their ticket to next year’s Asian Cup.

Mishra was recently named as the Young Player of the Year at the Football Players Association of India awards and is surely one of the brightest talents in India right now.

Apart from everything else, Mishra is looking forward to learning more from Manolo Marquez as he understands the Spaniard’s greatness. It is one of the primary reasons that convinced him to stay at the club. “You don’t have to convince a player to play for Coach Manolo. Anyone who has played under him will tell you how good he is on and off the field. I have learned a lot from him and I hope I can continue learning in the years to come,” he concluded.