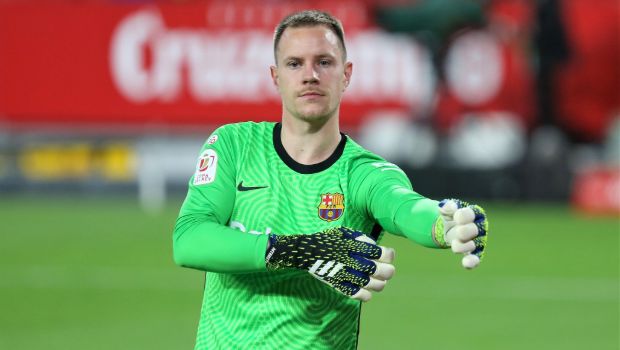 Barcelona and Germany shot-stopper Marc-Andre ter Stegen has ruled himself out of the upcoming European Championships next month due to a knee injury he picked up during a recent La Liga match.

The 29-year-old will miss Barcelona’s final match of the season against Eibar but he is hopeful about making a full recovery ahead of the next season. He is also supposed to see a specialist to deal with his knee problem later this week in Sweden.

Barca’s hopes of the title race came crashing down with their 2-1 defeat against Celta Vigo on Sunday and it was after this game that the decision on Ter Stegen was taken.

“Ter Stegen will undergo a therapeutic procedure on the patellar tendon in his right knee on Thursday in Malmo by Dr Hakan Alfredson and under the supervision of the club’s medical services,” Barca said in a statement.

Ter Stegen had encountered a knee problem last season as well but he recovered from that and went on to make 41 appearances for Barca this season. However, according to latest reports, the two issues aren’t related at all and this week’s treatment is going to be merely an assessment, and not any kind of operation.

“I have decided together with the medical team of the club that I will do a complementary intervention on my knee,” Ter Stegen wrote on Instagram.

“I’m sad that I will miss the Euro 2020 this summer with Germany. For the first time in many years, I will be a fan at home supporting my country, I hope we win it!

“After the summer break, when we are back on the pitch, I hope to be able to play with fans once again, I miss it.”

Ter Stegen has made 25 appearances for his country so far but he has still not been able to beat Manuel Neuer to Germany’s No.1 Goalkeeper status. With him ruled out of the entire competition now, Neuer is going to be a definite choice between the sticks for Germany.