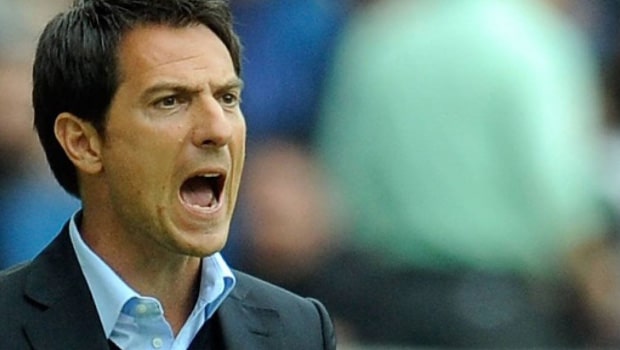 After winning the season opener Bengaluru FC are winless till now as they recently lost against Hyderabad FC in the Indian Super League. Bartholomew Ogbeche’s solitary strike was enough to power the Nizams to a 1-0 win over Marco Pezzaiouli’s men.

The Blues are now winless in their last four league matches and among them, they have lost three. Hyderabad FC started the game on the front foot and courtesy of Ogbeche the Nizams got the lead early in the game and did manage to hold on to the slender lead.

The Blues did have some chances but they failed to break down the Hyderabad FC defence and that must be a big reason for frustration.  The game always looked in control on Manolo Marquez and his men as the Blues never really threatened Juanan and his fellow defenders. Therefore the frustration was clear from Marco Pezzaiouli at the post-match press conference.

The German tactician was not at all happy with a below-par first-half performance. “I think we played a bad first half. It was the worst first half since I joined here. We didn’t win a single duel and lost most of the second balls too. We lost the ball when we had it too, ” he began.

Pezzaiouli was seen getting animated at the water break as he was helping Bruno Ramires understand his role. When asked what was he telling the Brazilian midfielder, the Bengaluru FC tactician replied, “Not only with him (Bruno), I was unhappy with our performance in the first half. When you are a key player in the midfield, you need to be sharp and that was why I was not happy. Not only him, one of the midfielders didn’t track the player back, he was more focused on offence and not on the defence and that’s why we conceded the goal.”

Bengaluru FC improved considerably in the second half with their pressing, possession and creation of chances. However, they lacked the final ball and their wasteful nature in front of the goal also played a part in them failing to convert their chances.

“We were better in the second half, we created chances, we pressed and tried our style. But, we couldn’t find the last pass to the right teammate. I think that was the problem in the second half. We won every duel and had 3-4 chances in the second half. But, when you get so many chances, you need to score. That’s what we didn’t do and that’s why we lost the game,” the German concluded.