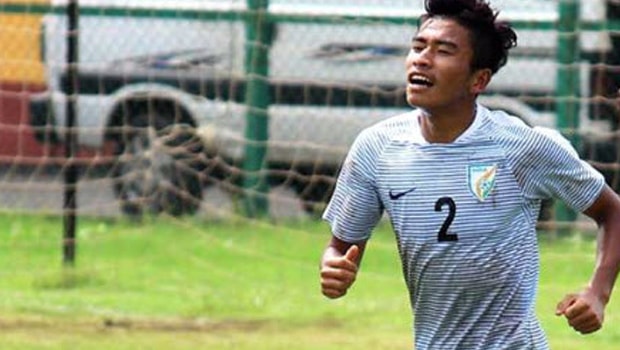 Former India, U17 player Boris Singh, has stated the impact of the All India Football Federation’s elite academy and the Indian Arrows FC on the progress he has made in his career.

The 20-year-old ATK player played for India at the AFC U16 Championship and later at the FIFA U17 World Cup, which was hosted by the country in 2017.

Before then, he had played for Manipur at the 2013 u13 national championship, which he won with the team.

Although, his time at the AIFF elite academy wasn’t straightforward, as he was rejected at the first try but an occurrence years later helped him get into the academy.

“It was the final group game and a do-or-die match. Their winger was about to skip past me, and I stick my foot out. I was shown a second yellow and was given the marching orders. I was not aware that a ban is carried forward in FIFA competitions. For that red card, I missed the opening match against the USA in the World Cup. I was sitting in the stands, and I could not hold back my tears. From that moment, I decided I am never going to be sent-off in my career,” Singh told Goal.

The youngster spent two seasons with Indian Arrows, which he said helped him build his confidence, especially as he worked with top-flight and elite players.

The 20-year-old defender joined Atletico De Kolkota in 2018, but he is yet to make an appearance for the 2019-20 India Super League champions while in two seasons at Indian Arrows, he made 31 appearances.

Irrespective, Boris has said he is unfazed by the situation, and he won’t hesitate to take his chance when he is given acknowledging the fact that there are top players at the club ahead of him.

“I am waiting for my opportunity. I will not get many chances, but I intend to make the most of that one chance,” said Singh to Goal.