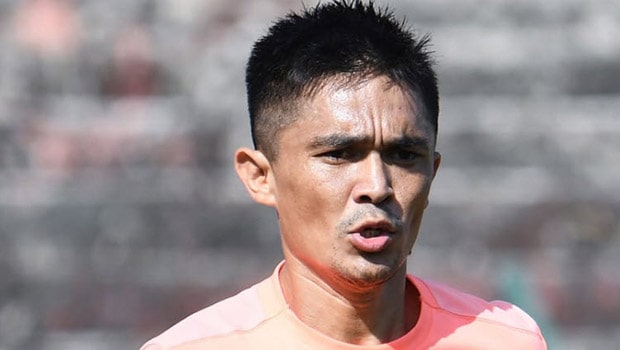 The Indian national team recently won against Bangladesh in their FIFA 2022 World Cup Qualifiers match. Indian skipper Sunil Chhetri who scored a brace against the Bangla Tigers and guided them to victory spoke to the media a couple of days later.

Chhetri who reached 74 international goals with his brace has overtaken Lionel Messi and hence the Indian media has started comparing him with the Argentine sensation. However Chhetri does not pay that much attention to those comparisons and claims that he is nowhere near Messi.

“I’m not annoyed by the comparison. It doesn’t bother me either because people have their opinions and nowadays have platforms where they can share and discuss them. In my opinion, there is no comparison whatsoever. There are thousands of footballers who are better than me and all of them are fans of Messi. What I’m proud of, is the fact that I have played over 100 matches for my country and scored 74 goals for the team. I’ll keep working hard till my last minute as an Indian international,” the striker said.

The 36-year-old feels immense pride in representing the nation and hence he works extra hard despite being the senior most player in the Indian team. “I keep going because I am wearing the Indian football team jersey. India has 1.4 billion people and I am one of the 11 names chosen to represent my country, Chhetri said.

“Wanting and trying to do our best is a bare minimum at that stage. It’s not as difficult as the path towards getting there, so that’s what we’re supposed to do. On some days I don’t score while on other days I convert my chances well. Either way, I ensure that I want and try to do my best,” he further added.

The Skipper feels that Igor Stimac’s style of play is very simplified and players are comfortable with the style that he wants to implement. However he wants the team to focus more on being braver with the ball as the team is filled with young players. He hopes that the style will soon be reflected in their gameplay as it takes time to settle in.

“The players are comfortable with the style the head coach wants us to play. It is a very simplified one and we need continuous training and matches to keep building on it. We want to see more passing, as it would mean running less and more 1v1 situations. The players want that too and are capable of it, but it needs time. A lot of players are comfortable with the ball and it will definitely come soon,” the Blue Tigers’ skipper said.

“Our next step from here is to be braver with the ball. We understand defending, communicating and taking care of ourselves. Everyone in the team is physically really fit and we are a very young side with many new boys.

“The head coach encourages us to keep the ball and the way forward is to keep the ball more and look to increase the number of passes and organized attacks. I tell the boys and myself to just turn up and give everything on the pitch and then you will take whatever result comes. You might not get as many moments of individual brilliance and technical play like through-balls, but we can fight by coming together. The opponent should think that we will be annoying and fighting and defending as a team and that is the first step. Slowly, other things will come from there,” he further explained.

Lastly the Indian skipper claimed that even if India wins against Afghanistan this World Cup qualifiers cannot be called a success. It is mainly because of the chances that the Blue Tigers have had in the previous matches and they have squandered it.

“Against Bangladesh, we were hurried at times in the final third and we will surely learn with more matches. The boys are ready now – they’re hungry and they work very hard. The coaches and technical staff are in sync with the players. The coach is not afraid of giving chances to players. If he sees someone who is good, he will always give the boy a chance. No player can say that I didn’t get a chance, which is a good thing. No coach likes to change his team every time. The players also have to help out and once it clicks, it will be more stable.

“Even if we win the last match against Afghanistan, I don’t think we can call the campaign a success. I look back at the matches against Bangladesh in Kolkata, Oman in Guwahati and Afghanistan in Dushanbe, where we did not play well. We have been hot and cold and that’s what bothers me. We need to continue playing at the same level,” he concluded.