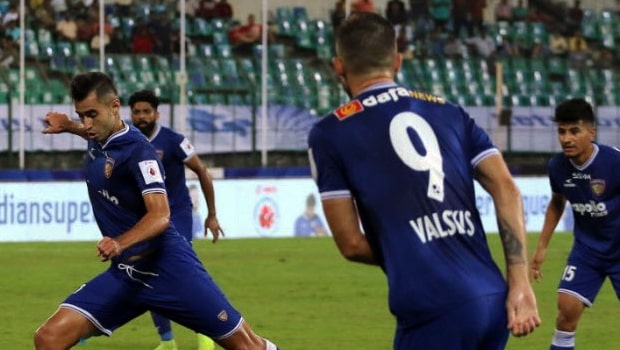 Chennaiyin FC forward Andre Schembri has decided to hang his boots from professional football after the Indian Super League final against ATK, which will take place on 14th of March. Andre, the Maltese footballer, is playing his maiden season in the ISL 2019-20 and this will also be his last.

The 33-year old forward has been instrumental in taking Chennaiyin FC to the final of the league as he scored five goals and provided three assists in the 17 matches he played in the season.

Andre stated that he felt the time has come to call it a day after 13 years of playing professional football. Schembri featured in UEFA Europa League and played club football in countries like Greece, Hungary, Germany, Cyprus and Portugal.

“After thirteen years dedicated to professional football overseas, I feel it is the right time to announce my retirement and focus on other aspects of the game,” Schembri mentioned in his official statement.

“I am proud to have had such a fantastic journey across Europe and Asia. It is not easy to leave such a small island like Malta to try and break through professional football,” added the versatile forward.

The Maltese International made a name for himself in the ongoing ISL season and he attained his fan-base for his clown celebration. He also revealed that his celebration is dedication for the noble cause called Dr. Klown, which he supports back home in Malta to spread happiness among ailing children in hospitals.

Andre, who scored maiden goal for Chennaiyin FC in this season against Hyderabad, gave his gratitude to all the coaches and players he has played with and against.

“I’ll be forever thankful to the backroom staff, teammates, coaches, and all the teams I’ve played with for the faith they have shown in me. My immense gratitude goes to my entire family and my closest friends for their continued encouragement and commitment to seeing me succeed, wherever the ball led me,” said Schembri.

Andre added that he has mixed emotions to play his swansong and he will try his best to take Chennaiyin FC to glory in the final.

“I am filled with many emotions right now – pride, sadness, but most of all, excitement to play the FINAL match of my career. Chennaiyin, I will give my all to bring the cup back to where it belongs!” said Schembri.

Andre Schembri will aim to bid adieu on a high. Chennaiyin FC are two-time champions of the ISL and they will look to give a bidding farewell to their forward, by winning their third title.

The final between ATK and Chennaiyin FC will take place at Jawaharlal Nehru Stadium in Goa on 14th of March.