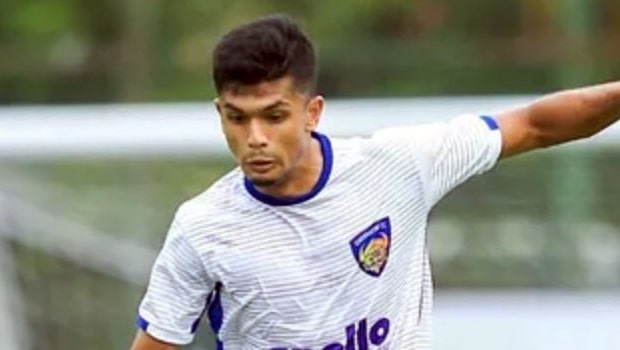 Chennaiyin FC’s talented youngster Syed Suhail Pasha did not get enough game time in the last Indian Super League season. He got to feature 182 minutes in his debut ISL season. He mostly came on as a substitute for the Marina Machans.

But the experience of sharing the dressing room with top players and the limited time on the field has come in handy for the youngster as he is currently plying his trade at the Reliance Development League. Suhail has featured in all the matches for the Marina Machans and has even opened the scoring.

He has been one of the players who has caught the eyes of scouts and experts at the RFDL. The youngster is the son of Chennaiyin FC assistant Sabir Pasha therefore, football runs in the family. Suhail is determined to use this game time at the RFDL to great effect and development into a much better player. It is the only way forward for the former Chennai City FC man as he aims to make it to the Chennaiyin FC starting eleven in the upcoming season.

“The development teams are really good here but the pressure and quality is much more different in the ISL. The foreigners come and you’re playing with current Indian players like (Anirudh) Thapa. So you know what the difference, pressure and excitement will be for every match,” Suhail told Sportskeeda in an interaction.

The youngster was snapped by Chennaiyin ahead of the 2021-22 season by then head coach Bozidar Bandovic. He hardly got any minutes in the first 13-14 matches. Then he started getting some late substitution minutes. Suhail’s first start came against SC East Bengal where he was played in midfield. Even in the following matches he played in midfield despite being a forward.

He shared how Bandovic’s sacking was a turning point in his career and how the new coach played a different formation and deployed him as a midifelder. So he shared the experience of adapting. He said, “This (Bandovic sacking) was the most important experience in my life. I’ve never experienced a coach being sacked even in the I-League when we have had difficult seasons.”

“The new coach chose a different formation so I had to adapt to that as well. It was difficult but I gained much more experience and played in different positions. My original position is striker but he made me play in attacking midfield,” he added.

Suhail understands that when the team has world-class players in his position, it will be difficult for him to instantly get into the starting eleven. He shares how Mirlan Murzaev was playing in his position, so he understood that he had to wait for his chances.  In your position, there’s star players like Mirlan Murzaev so how will you get a chance? I had to prepare myself and I just said, ‘Think positive and always stay positive’,” he said.

Currently the 22-year-old is looking to make the most out of his chance at the RFDL and then hopefully make a shot at the starting lineup in the upcoming Indian Super League.