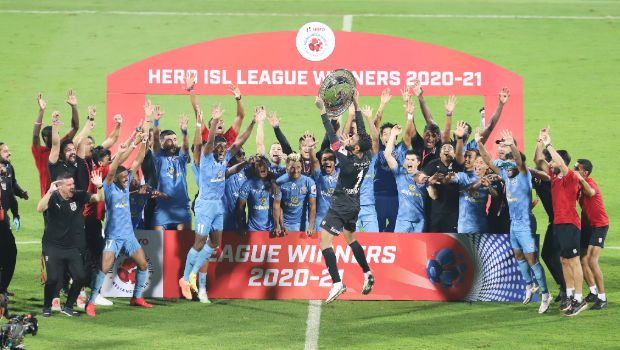 This was Mumbai’s 12th win of the season as they finished the league stage with 40 points at the numero uno position. ATK Mohun Bagan also ended with as many points but Mumbai had a better goal difference to finish at the summit of the standings.

Thus, Mumbai has won their maiden League Shield in the Indian Super League. The Islanders have also earned a direct entry into the AFC Champions League.

Earlier, Mumbai had sealed their place in the playoff stages when they managed a 3-3 draw against FC Goa, who have also qualified for the last four of the tournament. In fact, before that drawn match, Sergio Lobera’s side had broken the previous unbeaten record of Bengaluru FC, which had remained undefeated for 11 matches in the fifth season of the ISL.

Mumbai was consistent right throughout the season and credit goes to the collective effort of the team. Adam le Fondre has been magnificent for the club as the Englishman has thus far scored 11 goals in the 20 matches of the season.

Mumbai FC head coach Sergio Lobera was delighted with the performance of his team and stated that his team deserved to win the ISL Winner’s shield.

“I am very happy because Mumbai City and City Football Group (CFG) gave us everything and now is the moment to enjoy and analyze the things we achieved. I think my players deserved to win this trophy and finally, hopefully, we can achieve another one,” said the Mumbai City boss.

Mumbai City FC will face FC Goa in the first leg of the semifinal on Friday at the Fatorda Stadium whereas ATK Mohun Bagan will lock horns against NorthEast United FC at the GMC Stadium, Bambolim on Saturday.