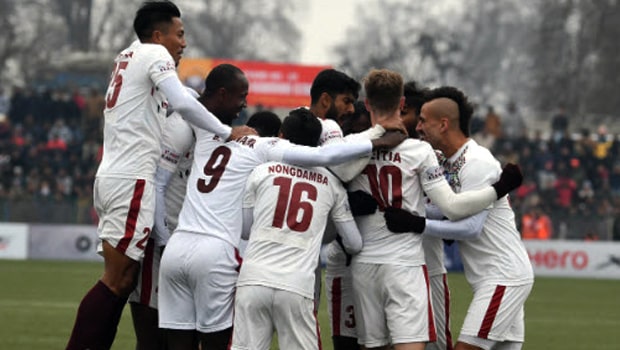 Mohun Bagan on Thursday had Daniel Cyrus solitary strike in the first half to thank for as the Kolkata side beat visitors Indian Arrows by a lone goal.

The Trinidad and Tobago defender found the back of the net with a volley from a deflection in the 19th minute, and it was all that separated the two sides at the end of 90 minutes.

Coach of the home side, Kibu Vicuna, did not make any change to his starting 11 that got a victory in the team’s last game against Real Kashmir in Srinagar in a 2-0 win.

He was rewarded with the team’s 4th win in a row as his side overcame a resilient Indian Arrow side who desperately needs a win as they sit bottom of the log with 4 points from six games played so far.

The result continues a poor run of form for Arrows, who now have only won one and drew one of their last five games played.

While the home side dominated the game fiercely only denied by good goalkeeping and the woodwork just three minutes after the restart, Arrows failed to Los threats to the home side.

On the I-league log, Mohun Bagan top with 13 points from 6 games as they lead second-placed Churchill Brothers, who have a game in hand, with three points.

Indian Arrows are rooted to the base of the standings with four points from 6 games, and they play newbies, TRAU FC on Sunday at the Ambedkar Stadium, New Delhi.

Meanwhile, in their next game, Mohun Bagan will travel to face third-placed Minerva FC next Tuesday.

In the other game in the I-league today, 9-man Gokulam Kerala lost to 10-man Chennai City at home by 3-2 in an exciting and controversial match where temperaments flared.