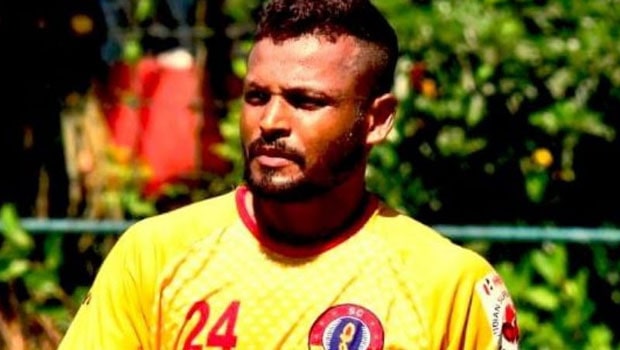 SC East Bengal custodian Debjit Majumder had a stellar season on his return to the Indian Super League wants to pledge his future with the Red and Golds for the next season.

Majumder who was on loan at Mohun Bagan in the previous season from the erstwhile ATK side won the I-League with the Mariners but he was mostly second fiddle to goalkeeper Sankar Roy. With the merger taking place and too many custodians to fight for one spot, Majumder decided to join the Red and Golds in their maiden ISL season.

He played in 15 matches out of 20 and made 50 saves registering two clean sheets. In a recent interview with Goal.com, he shared his experience with the club and his expectations for the next season.

The 33-year-old donned the Red and Gold of East Bengal after a decade, as he last played for the club back in 2011. So it was an emotional comeback for the custodian who did not think much when he received the offer.

“The last time I played for East Bengal was back in 2011 so it was 10 years back. It is an honour to play for East Bengal or Mohun Bagan. I know the legacy of the club. So at the beginning of the season when the offer came to join East Bengal, I didn’t think twice,” said the custodian.

Majumder revealed how head coach Robbie Fowler has treated them very nicely despite being such a big footballing legend. “Coach Robbie Fowler is an absolute legend. He is a very good human being. He was like a friend to us. When we first heard that he was appointed as the coach we thought about how it will be to work with a legend like him but the way he mixed with us and treated us was amazing. He is so down to earth despite being such a big name in world football,” he went on adding.

Currently, there is chaos going on between the club officials and investors Shree Cement Private Limited. According to the joint venture which both parties have entered the investors have acquired 76% of the stake and as per rules, the club will have to transfer the sporting rights and all the tangible assets to the investors. However, the club officials have not signed the agreement claiming that certain clauses are different from what was agreed earlier.

This issue has stalled the team’s player renewal progress and therefore a lot of players’ futures hang in balance. Majumder’s case is also no different from the other players as he waits from the club to approach him with the extension.

“Personally, I would want to continue at East Bengal but there is uncertainty as we all know. The team management told us that until the issue of the final agreement with the club is sorted they will not go into any further contracts with the players and that has been communicated to us. If I get an offer from the club I will definitely stay but until I get the offer, there is a bit of tension,” he stated.

The 33-year-old revealed that he has offers from some clubs but his heart is with the Red and Golds and so he would like to stay with the Kolkata based outfit. But the wait cannot be eternal. “I have got some offers but playing for East Bengal is a different feeling for me being a Bengali player. That is the only reason I am waiting but again I cannot wait forever,” he concluded.