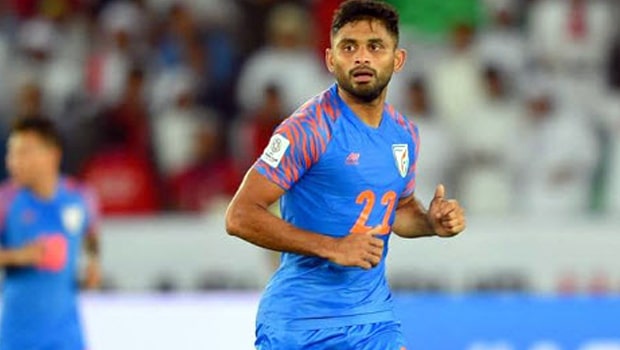 Indian international defender Anas Edathodika has left the squad camp in Dubai ahead of the World Cup Qualifiers to attend a family emergency back home in India. The Defender flew back home from Dubai to his native home in India on Tuesday. The Country’s football association AIFF revealed on their official Twitter account on Social media.

The Defender was with the rest of the Squad in Dubai before they left for Dushanbe and Muscat for their FIFA World Cup Qualifiers against Afghanistan and Oman, respectively.

However, when the AIFF Announced on their social media account, they failed to mention that it was a family emergency. Reports emanated that the Indian Defender has lost his mother, Kahdeeja, back in Malappuram.

India is already without Sandesh Jhingan in the Squad after he had to undergo a knee surgery suffered against NorthEast United F.C earlier this month. To add to their injury woes, it is not sure if Adhil Khan will be fully fit since he did not feature in the last two games for his Club Hyderabad F.C.

After the team’s training session on Tuesday in Dubai, Sunil Chhetri revealed that they need to convert more chances as it is a grey area that the team needs to work on the more. In their previous game, India had an array of opportunities against Bangladesh, which they failed to convert except for the headed goal by Adil Khan in the 88th minute.

The team has been creating enough chances. But they need to improve and convert the created chances and also be more compact in the defense. They need to avoid the missed opportunities against Bangladesh and try to convert them against Afghanistan. Chetri said if the team can be able to correct their mistakes, everyone will be proud of their performances.