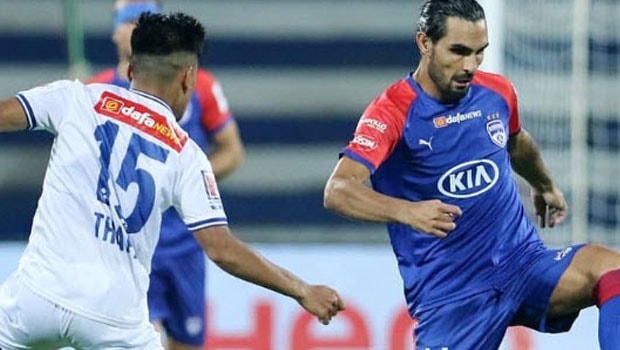 The 31-year-old joined Bengaluru from the Australian side Western Sydney Wanderers in 2017 after spending two years and making 50 appearances for them.

The club side made the announcement on Tuesday that the 37 years old Spanish Midfielder will play at the club till the 2020/2021 season.

This is after the club had offered Australian midfielder Erik Paartalu a 2-year extension after the 33-year-old contract expired. The journeyman, Erik Paartalu, had joined Bengaluru in 2017.

Delgado played 20 games for Bengaluru in the 2019/2020 season, where he contributed to six goals, which included five assists and a single goal.

The midfielder expressed his delight with the extension at the club, which he referred to as a home and a place where he is comfortable.

He also revealed that he has enjoyed his time in contributing to the recent achievements of the club, especially in the last three years.

Meanwhile, the player stated his experiences in the past three seasons makes him look forward to contributing to the club for an extra year.

While the player sees it as an honour to play for the side, he said he will keep doing his own part in helping the team.

“It’s an honour to pull on the Bengaluru shirt and walk out in front of our fans who have always shown me, love. We have more to achieve, and I will keep helping this team,” Delgado was quoted on goal.

Bengaluru finished third in the regular seasons with 30 points from 18 games played with 22 goals scored and 13 conceded. This meant a semi-final spot in the India Super League playoffs where they faced Atletico De Kolkota.