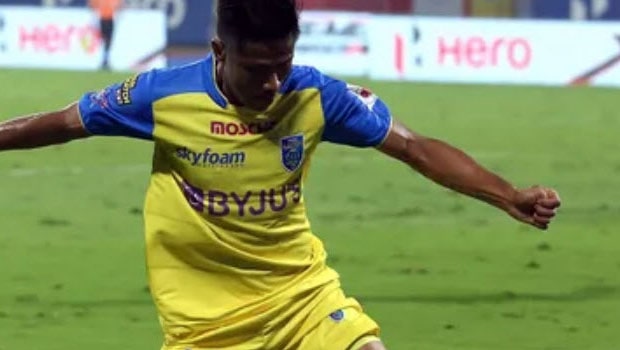 Kerala Blasters have extended their contract with left-back Yondrembem Denechandra for another three years. This will keep Denechandra at the club till 2024. The 27-year-old from Manipur, had penned down the deal with Kerala Blasters in August 2020 when he made the move from TRAU FC.

Denechandra was part of the final XI for the club in the seventh season of the Hero Indian Super League. The defender made six appearances for the team.

In fact, Denechandra started playing football at a tender age of 10 years in local stadiums. He made his professional debut in Manipur Football team in youth nationals.

After playing at Mohun Bagan A.C. and the Sambhalpur Academy in Odisha, he joined the Pune F.C. Academy with whom he won the U19 I-League on two occasions. Denechandra then featured consistently for teams like Churchill Brothers, Neroca and TRAU in the I-League before he joined the Blasters.

Denechandra stated that he had a good season with Kerala Blasters in the previous edition. Kerala Blasters finished at the 10th place in the league with only three wins and the defender is hopeful of a better season in 2021-22.

“I had a very good experience with KBFC in my first season despite the difficult conditions. I am sure we will have a much-improved season [in 2021-22] and I am very happy to have extended my contract with the club. Looking forward to meeting the great fan base of the club soon! Stay safe at home,” said Denechandra.

“Denechandra is physically strong, a solid player for Hero ISL. He needs to improve some angles in his game but he showed a lot of potential last season. I want him to keep wishing to improve and we are here to support him through his journey,” said Karolis Skinkys, Sporting Director at Kerala Blasters FC.