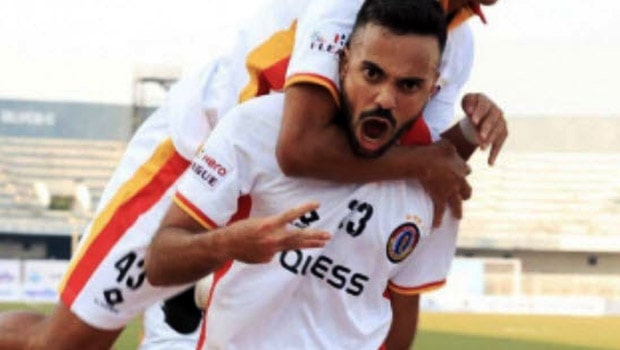 According to the team’s winger Juan Mera Gonzalez, East Bengal deserves a spot among the elites of club football in India.

Gonzalez, 26, stated this while granting an exclusive interview where he spoke about his experience playing in India.

The Spaniard is a product of Sporting Gijon youth academy, started life to the I-League last season on a fantastic note, endearing himself into the hearts of fans with his skills so much that he won the Man of the Match award against Real Kashmir in the season opener.

He had Sixteen appearances with the club last season, and the winger has already stated that he would love to extend his stay at the club.

Speaking on the club’s New investment deal with Shree Cement, which will potentially secure the club and India Super League place next season, Gonzalez stated that it is a good development for the club and its fans.

“I think it’s very good for East Bengal and for all the club fans that they will play in the ISL this season. I think East Bengal deserves to be among the best in India,” the Spaniard was quoted on Goal.

The player appreciated the time he had with the club, although he rued the missed chance to win the 2019-20 I-League season as the team finished second behind Mohun Bagan, who won the title with four games left to play in the season before it was cancelled due to the coronavirus pandemic.

Juan Mera Gonzalez has been featured for Sporting B, Celta B, Racing Ferrol, Teruel, Leioa, and East Bengal, the most recent of all.

Meanwhile, the investment deal between Shree cement and East Bengal sees the investors take the larger percent of the club’s share, and the club prepares for the new season.