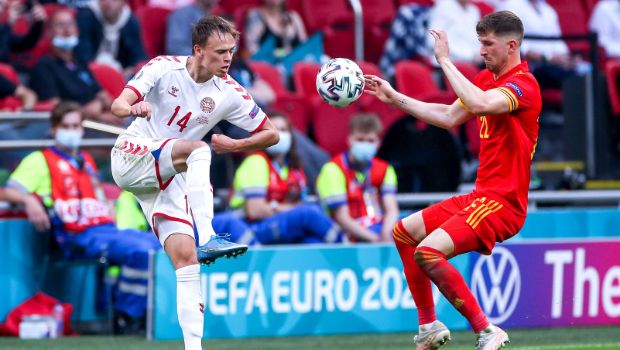 Mikkel Damsgaard scored the first direct free-kick of this year’s European Championship to give Denmark the edge over England in front of a packed Wembley Stadium in the second semi-final.

However, the Three Lions fought their way back and a Harry Kane penalty following a soft decision in extra-time proved to be the difference between the two teams.

England are now in the first final of a major tournament since the 1966 World Cup which they had ended up winning. Following the semi-final against Denmark, England head coach Gareth Southgate urged his side to overcome one last hurdle in the final and also added how proud he was of the players.

“I’m so proud of the players,” Southgate said “It’s an incredible occasion to be a part of – we knew it wouldn’t be straightforward. We said to the players we’ll have to show our resilience and come back from some setbacks, and we’ve done that tonight. The most pleasing thing is that we’ve given our fans and our nation a fantastic night, and the journey continues on for another four days.

“There’s one more massive hurdle to try to conquer. Italy are a very good side. They’ve shown outstanding form and have defensive warriors at the back who have been through everything. It’s something to look forward to.”

England conceded their first goal of the tournament after Mikkel Damsgaard raised the roof with his perfect knuckleball free-kick. However, instead of being pegged down by the goal, England players were quick to act. Bukayo Saka continued to force the issue and his square pass to Raheem Sterling in the box was accidentally slotted into the net by Danish defender Simon Kjaer.

Southgate seemed very pleased with England’s response after they conceded their first goal of the tournament. “I felt calm in the lead-up to the game because I felt the players were ready,” he said. “You’re never 100% sure how they’ll react [to conceding first]. But we have talked about it and they stayed calm.

I didn’t think they kept the ball well enough and we need to do that better on Sunday. But we found a way to win.”

Southgate also lauded star striker Harry Kane for scoring the rebound after his penalty kick was saved by Kasper Schmeichel. “There’s nobody you’d rather have on it, but you’re up against a great goalkeeper who he’s obviously faced a lot of times,” England’s manager said. “Thankfully that’s now immaterial.”