Euro 2020: No complaints, only congratulations for the players, says Spain’s Luis Enrique 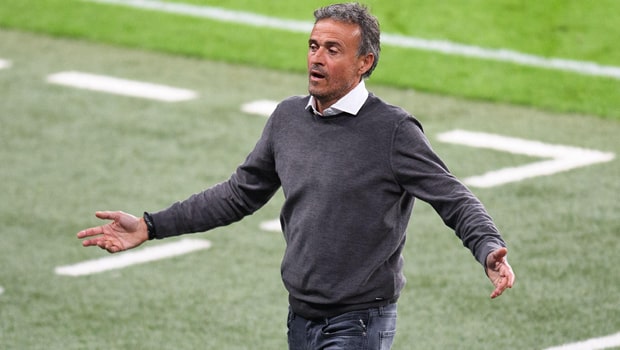 Spain head coach Luis Enrique has said that he has no complaints but only congratulations for the players after his team lost 4-2 on penalties in the Euro 2020 semi final against Italy on Tuesday. Federico Chisea gave the lead to Italy in the 60th minute but Alvaro Morata was able to score the equalizer for Spain in the 80th minute of the game.

Spain dominated the contest as far as possession is concerned as they had 71% of the ball. Enrique’s men had 16 shots on goal as compared to Italy’s seven. However, Spain couldn’t keep their calm in the penalty shootout as Alvaro Morata missed his chance.

Subsequently, Jorhingo’s penalty sealed the deal for Italy as they qualified for the final.

“It is not a sad night for me, not at all,” Luis Enrique told a news conference. “Of course there is some disappointment but that is elite football. You have to learn to win and lose. We talked a lot about how we wanted to play, the players believed in it and I can only congratulate them, I have no complaints.

“We have shown that we are a team. Now it is important to recover and then we will meet again ahead of the World Cup qualification.”

On the other hand, Spain’s young sensation Pedri, who earlier became the youngest player to play in European Championship, came up with a stellar show. The 18-year-old youngster completed all of his 56 passes in the first 90 minutes in the semifinal. In fact, France’s Samuel Umtiti had achieved 100% accuracy in passing and he was the first player to do so since 1980.

“No 18-year-old has done what he has,” Luis Enrique added. “His performances, his interpretation of the role, how he finds free space, his quality, his character… I have never seen anyone do what he does, it is devoid of all logic.”