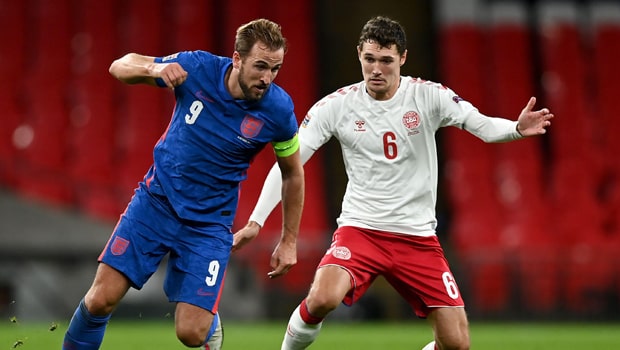 Denmark defender Andreas Christensen has expressed optimism that they can stop England skipper Harry Kane in the upcoming semifinal clash of Euro 2020. Kane is going to hold the key for the Three Lions and it will be crucial for the Danish team to keep him in check.

Kane has been in top form in the last two matches as he has delivered the goods for his team. The lanky striker had scored against arch-rivals Germany as England won the Round of 16 by 2-0 whereas Kane scored a brace as the English team thrashed Ukraine by 4-0 in the quarterfinals.

Meanwhile, Andreas Christensen’s club Chelsea have a good record against Harry Kane. Furthermore, Denmark will have some advantage as Pierre-Emile Hojbjerg has the experience of playing with Kane for Tottenham Hotspur and he can provide inputs to his teammates on how to keep the England forward at bay.

“We know his qualities, and everyone has an idea of what we can do to stop him,” Christensen told a news conference. “Pierre-Emile Hojbjerg also knows him, and it may be that he can share some things. All football players have their habits, and we must take advantage of them.”

Christensen admitted that Kane has an advantage because of his height and ball control. The Danish defender added that Kane is one of the best finishers in the game.

“He is good with his feet and he is one of the best finishers in football,” Christensen said. “I react a lot on instinct. He is very big, so it is hard to get into his body, but he also has great qualities with his feet, so you should not get too close either.”

“We’re aware of Harry Kane, but you cannot place an order to wrap a player up. We know all about how they attack, so we’re creating some structures to stop the English attacks,” he told reporters.