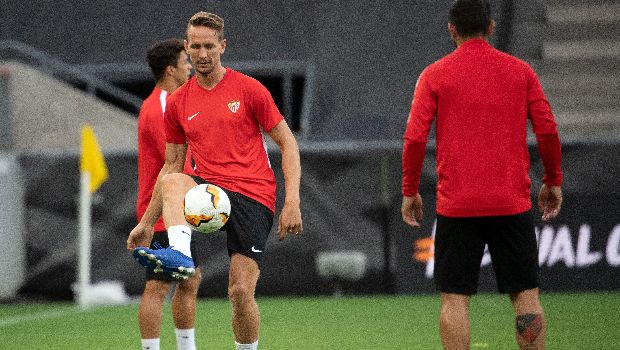 Luuk de Jong will no longer be available for selection after he was ruled out of the remainder of the tournament due to a knee injury.

De Jong was seen limping at training earlier this week after he suffered a challenge by teammate Cody Gapko and the damage is significant enough to see an early end to his involvement this summer.

De Jong seemed to be the first-choice striker alongside Memphis Depay prior to the tournament but during the group stage Frank de Boer has made it clear that both Wout Weghorst and Donyell Malen are above the Sevilla man in the pecking order.

The Sevilla striker was brought on late against both Ukraine and Austria but was an unused substitute against North Macedonia. One can only assume a similar pattern would have been followed in the rest of their games. Unless Netherlands really needed a goal late in the game, Luuk de Jong’s role would be minimal.

In hindsight, it does seem a small blow as Netherlands have looked quite solid even without relying on de Jong but only time will tell if they will miss some firepower going forward. As of now, the likes of Memphis Depay, Gini Wijnaldum, Wout Weghorst, Donyell Malen and even Denzel Dumfries are doing a clean job by scoring sufficient goals.

A statement from the Dutch FA read: ‘Luuk de Jong is forced to leave the training camp of the Dutch national team.

‘The Sevilla striker injured the inner tube of the knee during training on Tuesday. As a result, the 38-time international can no longer play for the Orange this European Championship.’

Frank de Boer will not be able to call for a replacement right now which leaves the squad short of 2 players as Donny Van de Beek had pulled out earlier as well.
Netherlands have a fairly easy route to the semi-final after finishing first in the group. Their round of 16 match will be against Czech Republic, following which they will meet either Denmark or Wales in the quarter finals.