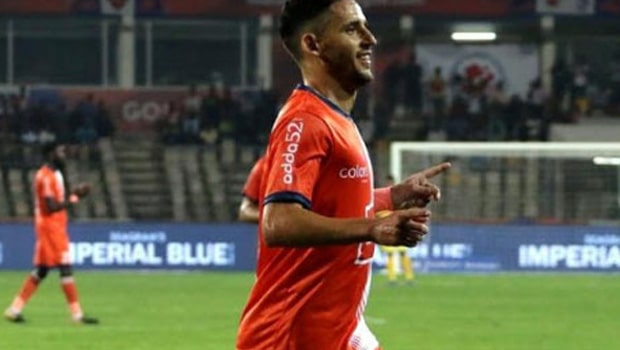 FC Goa striker Ferran Corominas has parted ways with the club after spending three successful years in the Hero Indian Super League, the club announced on Wednesday. Ferran is one of the most successful forwards in ISL history as he has scored a total of 48 goals (which is the most thus far) in the history of the tournament.

The Spainiard played 57 matches for FC Goa and bagged two consecutive Golden Boot awards in 2017-18 and 2018-19. Corominas had a perfect start to Hero ISL as he scored his maiden goal in the 25th minute against Chennaiyin FC in 2017-18.

Subsequently, he scored a hat-trick against Bengaluru FC in his debut home game for FC Goa.  He finished the season as the highest goal scorer with 18 goals in his maiden season in which he played 20 games for FC Goa.

Corominas continued his good form in the second season as he found the net on 16 occasions in 20 matches of 2018-19 season to once again finished as the leading goal scorer.

The 37-year old experienced striker scored 14 goals for FC Goa in 2019-20 and ended as the second highest goal scorer of the sixth edition of Hero ISL. He also provided four assists and led the team to the inaugural League Winners Shield. Thus, FC Goa became the first Indian club to directly qualify for the group stage of the AFC Champions League.

During his impressive stint with the Gaurs, Corominas helped his team reach the playoff stages in all the three seasons that he was part of the team. FC Goa also made it to the finals of 2018-19 but they could not cross the last hurdle against Bengaluru FC.

There is no doubt that FC Goa will have big shoes to fill after the departure of Ferran Corominas. The ISL 2020-21 season will begin from November 21.