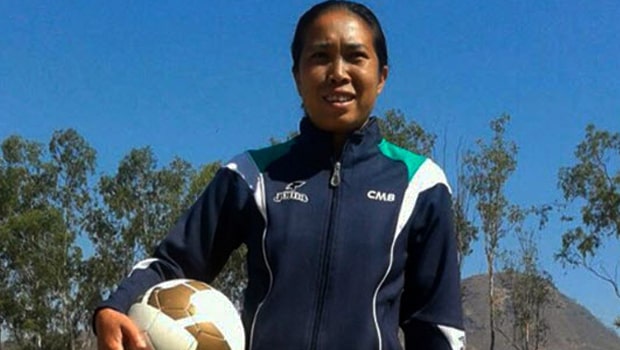 Former Indian Women’s National Football team captain Bembem Devi has made history after becoming the first-ever female and the 7th football player to awarded one of India’s high-status awards.

Popular known as “Durga of Indian Football,” she was recognized alongside six other awardees of the Padma Shri Award for what they have achieved and contributed to sports in the country in the year under review.

She goes into the history books alongside Sunil Chhetri, the last winner, Bhaichung Bhutia, Late Sailen Manna, Late Gostho Paul, and PK Banerjee, who are all former recipients of the award.

Devi had before now been awarded the Arjuna Award in 2017 and as well been previously being named the AIFF women’s footballer of the year, the first-ever winner of the prize back 2001.

She won the prize once again, the second time in her career in 2013, an retired in 2016 and has since gone into managing teams.

The Midfielder became the captain of the India women’s national team in 2003 and was able to lead the team gold at the South Asian games twice.

In 2017, she guided Eastern Sporting Union to an Indian League title while she has also been with various Indian female national teams from the U15 level up to the U17 level.

While speaking on the award, Devi revealed her joy and satisfaction as her hard work has yielded positive results, which came in the form of the Padma Shri Award.

She claims she can’t hide the excitement it brings, and it will serve as a source of motivation for future assignments.

Furthermore, it is her hope that her feats and the award will spur other girls and the next generation of female footballers as well as other sports who will emanate from India.