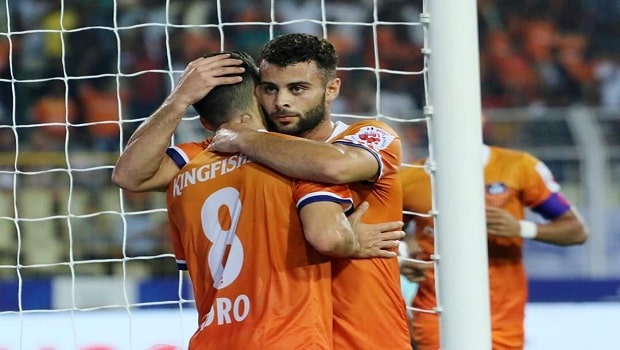 Indian Super League side, Goa FC on Thursday, showed why they have been on top of the Hero ISL as they overcame a stubborn Chennaiyin away from with a seven-goal thriller.

FC Goa beat Chennaiyin 4-3 in Chennai and the win, the visitors fourth in five games, not only made them remain on top of the ISL standing but as well means the home side’s four-game unbeaten run has ended.

The Guars were on the path to victory from the start as they led in the 26th-minute through Ahmed Jahouh, who converted a Hugo Boumous generous pass after Chennaiyin had lost possession carelessly.

Brandon Fernandes added one more fifteen minutes later as Chennaiyin again turned over possession with a sloppy back pass, which set Germanpreet Sing through who then gave the ball to Fernandes, who scored.

Hugo Boumous then scored one of his own just a minute after half time from yet another horrific defending from the home side as Jackichand Singh passed to Hugo extended the led further.

Ten minutes later, Chennaiyin started what seemed like a comeback as Andre Schembri scored from a cross Rafael Crivellaro into Goa’s box.

Two minutes later, Crivellaro scored to reduce the deficit to one goal, only for Ferran Corominas to score a fourth for Goa, which put the game beyond the hosts.

At 4-2, it was looking all done for Goa in Chennaiyin, but Rafael Crivellaro managed to draw the score to a respectable 4-3 scoreline.

The game didn’t end without Edwin Vanspaul was shown the exit for a second yellow and second bookable offense.

In the standings, Goa will remain atop the league with 21 points with the second team ATk while Chennaiyin are still in the bottom half of the table with 9 points from 10 games.

Goa’s next game is in 2020 away to Bengaluru, while Chennaiyin will travel to Odisha in the first games of the new year.