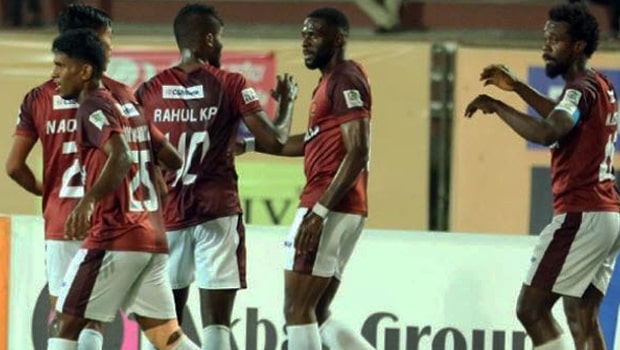 9-man Gokulam Kerala on Tuesday held East Bengal to a 1-1 draw to share the points in one of the two I-League games played.

Gokulam Kerala has been battling inconsistency in recent games had loss two games, drew two and won one before the visit of East Bengal.

East Bengal on their part has been slightly better with two wins and two draws as well as a loss in their last five matches.

The hosts came out gun blazing from the start of the game and were the ones asking all the questions in the first ten minutes of the game.

Captain Marcus Joseph took the initiative as he scored from a spectacular strike from outside the box in the 9th.

However, the visitors equalised in the 24th as Victor Perez scored from the penalty spot after Juan Mera was brought down by Naocha Singh.

Both teams went into the break tied on level terms as the tempo of the match dropped before the break.

The hosts then started the second half on a worst possible note as Naocha Singh was sent off for a second bookable offence.

Despite the numerical advantage for East Bengal, they failed to make it count as the game went on until 90 minutes without a goal.

However, the hosts somehow managed to still get a second red card of the game when Haroon Fakhruddin was also sent off for a second bookable offence.

Gokulam are now sixth with 19 points from 14 games with 18 goals scored and 18 conceded as well.

East Bengal, on the other hand, are two places above Gokulam in fourth with 20 points from fifteen games played with 22 goals scored and 18 conceded.

Up next for East Bengal is a trip to Real Kashmir on 9th March 2020 while Churchill Brothers will welcome Gokulam Kerala 8th March 2020.