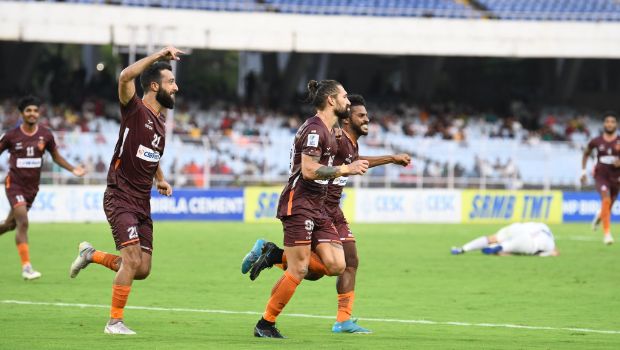 However, the Malabarians did not get to celebrate that success for long as they suffered a 1-0 defeat against Maldivian champions Maziya Sports & Recreation in their second match.

Maziya’s forward fromSt. Vincent, Cornelius Stewart scored the winning goal for them and kept themselves alive after their slender defeat to Bangladeshi outfit Bashundhara Kings in the first match of this year’s AFC Cup campaign.

Maziya’s win over Gokulam has now tied all the teams with a single win and a loss after two matches. And has opened up Group D.

After the match Gokulam coach Vincenzo Alberto Annese shared his thoughts as he rued the missed opportunities that his players left on the field. He also credited Maziya and shared how Gokulamwas unable to deal with the pace that they had in attack.

“The performance was not at the level we wanted tonight. The speed of the game wasn’t easy too. They had quality players in the attack, big possession-based style and it was difficult for us because our defence struggled to make contact. I know some of our players didn’t play to their strengths or start in the right way and that caused a problem,” Annese stated at the post match press conference.

The Italian tactician highlighted several points regarding the practice ground and having a lot of distraction. He then also shared how his team did not win the second ball and were unable to control the game.

”They have players with more experience in this competition, but it’s not just because of that we lost. We had a lot of distractions before the game, like we didn’t get enough time for pre-match training as the pitch was still being fixed (due to the rain).”

“The players didn’t have it easy to defend, in order to defend you have to win the second ball. When you don’t fight for the second ball and when you don’t act to the spirit of the competition, you go forward but you can struggle in defensive spaces, then you get vulnerable,” Annese added.

Lastly the italian shared that his team have already proven that they can produce performances like the ones against ATK Mohun Bagan, so he does not want to think about the loss against Maziya much and wants to focus on the next game against Bashundhara Kings.

“If we play with the spirit as we did in the last game against ATK Mohun Bagan, we can produce that same performance. Maziya had the quality in attack and they have a very experienced coach, he has won multiple trophies. For us, we need to think about the next game, recover well and not think too much about this loss. We need to recover well and prepare ourselves for the next game,” the Gokulam boss concluded.