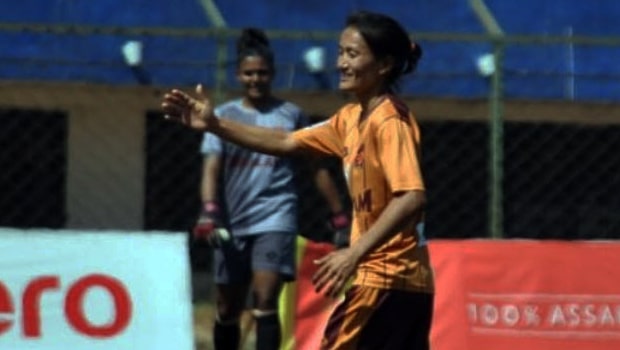 Kamala Devi was the Heroine for Gokulam Kerala as her Hat-trick led the side to a 5-1 thrashing of Bangalore United in the Indian Women’s League.

The win sent Gokulam Kerala through to the Semi-final with one match still left to be played as the win ensured that the team would finish at the top of their group.

Sreebhumi are the team placed in second, and they trail Gokulam with an unassailable five points with the latter confirmed for a semi-final spot while the result meant that Bangalore has now been eliminated.

The game got off to a slow start for the hosts, Bangalore at the Bangalore Stadium as poor defending let Gokulam score a first, three minutes into the game.

A deflected strike off Komal Kumari’s leg beat the goalkeeper in goal for Bangalore, but the team managed to equalize through a spectacular and brilliant volley from Satyabati Khadia in the fifth minute.

Bangalore was hopeful of a result after the early equalizer, but they failed to add another goal in the first half as both teams went into the break on levelled terms.

However, Gokulam Kerala started the second half with a rush of goals as they bombarded the hosts as early as the game restarted.

Gokulam’s Sabitra Bhandari powered a header beyond Vinaya Seshan in the post for Bangalore as the visitors led again, and moments later in the 51st minute, Kamala Devi got herself a goal after getting through with only the goalkeeper to beat.

Another stroke of poor defending from Bangalore’s Komal Kumari led to a penalty for Gokulam as Dev scored to hit a brace.

Just when it all seemed as though the final scoreline will be a 4-1 win, Devi stepped to complete her hat-trick with a solo effort beating three defenders in the 93rd minutes to end the game 5-1.