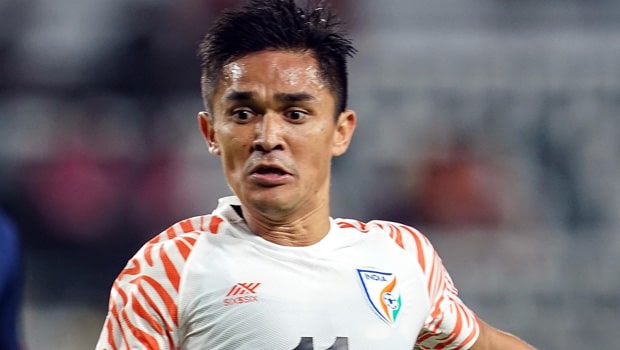 The Indian national team is going through dire straits at the SAFF Championships in the Maldives. The Blue Tigers have struggled to find their feet as they started the tournament with two consecutive draws against Bangladesh and Sri Lanka. However, they came back to winning ways with a 1-0 win over Nepal.

Sunil Chhetri scored the solitary goal for India in the 82nd minute keeping India’s hopes of qualifying for the finals alive. Igor Stimac’s men have scored twice in three matches and on both occasions, Chhetri has found the target. The entire team have struggled to find the back of the net, leaving them tied with bottom-placed Sri Lanka in terms of goal scored till now.

Chhetri’s goal against Nepal was his 77th international goal which drew him level with Brazilian legend Pele. Even at 37, the Bengaluru FC man has been Indian go-to man upfront.

“I keep getting asked about my consistency, and I wish I had an answer. But the truth is, there is no blueprint. It’s more about wanting to turn up every single day and give it my best, which, thankfully, I’ve never fallen short of,” Chhetri told PTI.

The veteran was once again feeling emotional, reminiscing his early days with the national team. He has been with the Indian national for decades now and has played with legends like Bhaichung Bhutia, Renedy Singh and many others. He considered himself lucky to share the dressing room with some of the top players of this nation. He also shared his gratitude towards his current and former coaches.

The Indian captain wants to continue doing what he is good at and does not pay much heed to talks regarding his age. “It might sound like a lie, but I’ve never given my future as a footballer any thought. As I said, the one thing I probably do the best is wake up and turn up to train and play. I look forward to it, thoroughly enjoy it and haven’t ever wanted to stop doing it.”

For now, India needs Chhetri to strike again as the Blue Tigers are heading towards a do or die game against hosts Maldives. A win for either team will take them to the finals of the SAFF Championship.