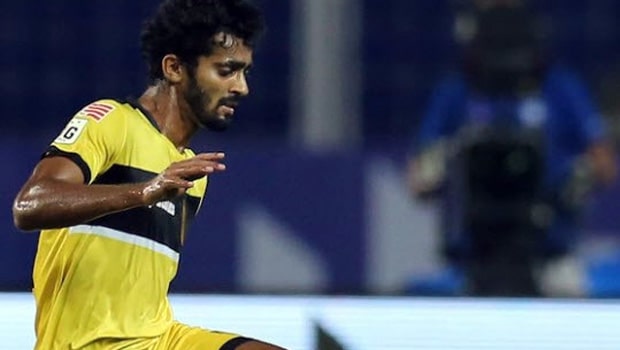 Hyderabad FC were very impressive last season in the Indian Super League. A bunch of Indian youngsters flourished at the club under the tutelage of head coach Manolo Marquez. One such name is Akash Mishra who has gone on to play for India at the senior level.

While there will be hopes of getting into the top four and competing in the playoffs, Hyderabad FC will once again look to stick to their free flowing football. Akash Mishra will definitely have a big role to play as he would like to grow in stature from last season.

The youngster has featured for the Indian Arrows in the past and have honed his skills there under Floyd Pinto and Bibiano Fernandes. Later he was signed by Hyderabad FC and things started rolling for the fullback.

He recently shared his experiences at Indian Arrows where he said how the project helped him a lot to develop as a player. “The Arrows helped me a lot. I spent two years there and there was so much to learn. They are a part of the reason for who I am today. I learned a lot of stuff on and off the field as well, training with some quality players. But regular game time, in a competition like the I-League, was probably the biggest way in which the Arrows helped me improve, ” Mishra told Sportskeeda.

Head coach Manolo Marquez has always held Mishra in high regard. The Spanish tactician has gone on to even say that Mishra was the best left-back in the country.  The youngster however is unfazed about all the claims as he wants to remain focused and improve on his game every day. The youngster even highlighted how Manolo taught them how to speak to media and conduct themselves.

“There is always a lot being said about any player who does well but I believe that it is on that particular individual who chooses to react in his own way. I remember coach Manolo coming up to me in training and discussing this exact point.

“He explained to me that it was not the time for me to lose focus and reminded me of how much more I have to learn and taught me to stay grounded even with all the talk in the media, ” Mishra added.

it will be interesting to see how Akash Mishra and head coach Manolo Marquez turn up in their second season at the Indian Super League. Hyderabad FC fans will be hoping to see the club do well and at least reach the playoffs.