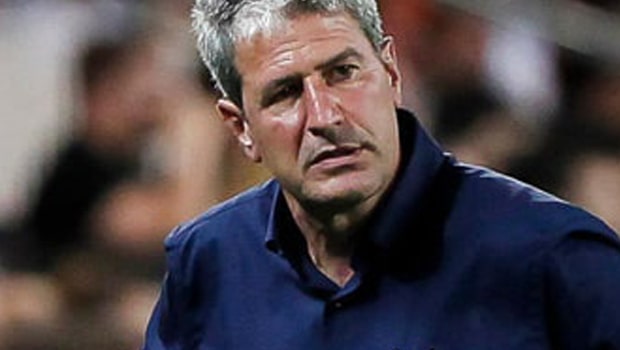 Hyderabad FC recently lost to Kerala Blasters and failed to regain their spot at the summit of the Indian Super League. It was a solitary strike from Spanish striker Alvaro Vazquez that helped the Yellow Army to get the better of the Nizams in their recent Indian Super League clash.

Hyderabad FC head coach Manolo Marquez was not satisfied with the result. He felt that his team did not deserve to lose as they controlled most of the game and played better than their previous outings.

“I think we played a lot better than other days. We controlled the game in the first minutes of both the first and the second half. But, they had very good players, especially the offensive ones and they could score at any moment, even if you are attacking more than them,” Marquez began at the post match press conference.

Manolo Marquez’s men were in similar situation against ATK Mohun Bagan in their previous match where Siverio scored a late equaliser to salvage a point from the game. The Spanish tactician was questioned the difference between the two games.  He highlighted how they took their chances in the previous fixture and also admitted that maybe his substitutions were a bit too late.

“That we didn’t score (the difference) I think it’s an easy answe,” Marquez replied. “We scored, I don’t know, from my position it is impossible to know if it was offside or not. But, the difference was that the other day, the last substitution and the change in the system was early. But today I was looking that we could equalize in the game in one moment and then maybe that the substitutions were late, this was the reason.”

While Kerala Blasters have taken the top spot with this win, Manolo Marquez feels that the league is far from over. He highlighted how six to eight teams are figting for the playoffs spots and any moment things can change for a particular team.

“All the six, seven teams, eight teams, I think that we are candidates (for top-four finish), It is a very very equal game. I don’t want to repeat, but sometimes we forget who these teams are (Kerala Blasters FC and Hyderabad FC). We (Hyderabad FC), we are trying to grow in football. Kerala Blasters has a fantastic fan following. I think that all the teams have possibilities. Yeah, I’m not happy because we lost the game. But I think that the game was very good in terms of football,” the Spaniard explained.

Lastly he revealed that Javi Siverio will finally get his first start against Chennaiyin FC in their next game as Bartholomew Ogbeche is suspended for picking up his fourth yellow card.

When questioned who will replace the Nigerian talisman in the next game, Marquez replied ” Yes, Javier Siverio will play. This is the rule. If you have four yellow cards, you can’t play, but for sure we will play with 11 players, that is for sure. Then, Javier has a lot of possibilities to play as a number nine against Chennaiyin FC.”