I don’t tell the team to score only from setpieces: Bengaluru FC Coach Carles Cuadrat 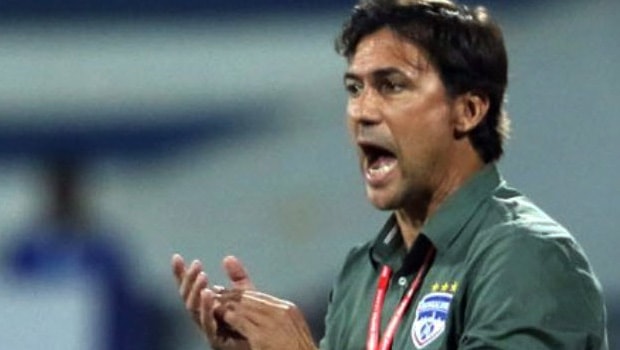 Bengaluru FC will take on NorthEast United in their fourth game of the Indian Super League season on Tuesday and their head coach Carles Cuadrat has addressed the need to be better in attack on the eve of the clash.

The Blues picked up their first win of the season in their last match against Chennaiyin FC courtesy a Sunil Chhetri penalty. Their approach while going forward hasn’t been that impressive this season and that’s why they need to work hard to improve it.

“We have been working on the tactics. It will be a tactical game. It will be interesting how they are going to approach the match and how we respond to that and get the three points. NorthEast are very compact in defence. They have been waiting for opportunities to attack. It will be our work to break them down,” stated Cuadrat.

Bengaluru acquired the services of two quality foreign strikers in Cleiton Silva and Kristian Opseth for this ISL season but they are yet to find shooting boots. However, Cuadrat assured that both of them are working hard in training and it’s only a matter of time before they get going.

“When you are not good enough to score from open play, you work in training and have a plan (to change that). You also work from setpieces. But obviously, I don’t tell to score only from setpieces. The previous game was pretty close. It is only about the last pass. We are working on it. Sometimes it doesn’t happen. Maybe because of the physical state of the players or a bit about confidence. But we are being consistent,” the Spaniard said.

Even though their attack is yet to yield top results, their defence has continued being resolute like last season. Bengaluru had recorded the highest number of cleansheets in the 2019-20 season and they already have two in the three games so far.

“In three games we have two clean sheets. We are showing consistency in defence. We had a short bad situation against Goa. Apart from that, it has been fine. All the teams have a match plan. Since I have taken over as coach we have lost once against Chennaiyin FC and have never lost against Goa. We are good tactically. But we have to improve in certain aspects. The second goal is also important. If you don’t get a comfortable (goal) difference, you can get into trouble in ISL. The team is showing consistency,” Cuadrat signed off.