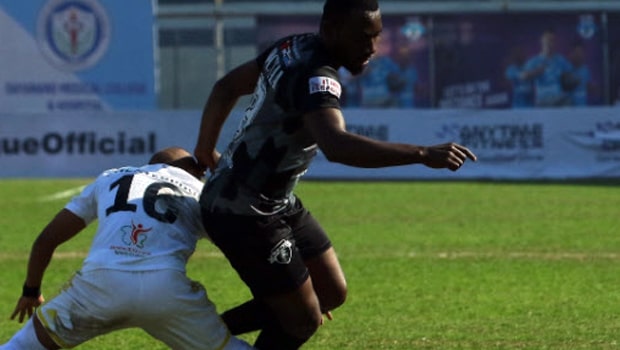 Dipanda Dicka was the star man of the game when his lone strike ensured that his side, Punjab secured all three points against Real Kashmir.

The I-league game was played at the Guru Nanak Stadium on Sunday, and it was the home team who took the game by the scruff of the neck although, despite the dominance, the breakthrough didn’t come until a minute before half time which eventually stood as the game’s lone goal.

Quite understandable, especially looking at the recent form of both teams. While Real Kashmir had won all three previous games, which coincidentally were all away games, Punjab hasn’t lost at the Guru Nanak Stadium in their last seven games there.

That record was at risk with the visit of RKFC, but after enjoying much of the play and possession, Cavin Lobo and Dipanda Dicka were both involved in a quick one-two which the latter smashed home.

With the goal, the Cameroonian is now the joint top scorer in the I-league alongside Spaniard Francisco Gonzalez with nine goals each.

Punjab resumed the second half with the same level of momentum they carried from the first half as the Snow Leopards struggled to keep up and mount pressure of theirs.

Dicka was almost close to adding a second goal in the second half, but he was denied by the away goalkeeper.

The result means that Punjab remains in second place behind runaway leaders Mohun Bagan as they have 21 points from 13 games, eight less than Bagan who has a game in hand.

For Real Kashmir, their impressive run of wins come to an end as they sit sixth with 15 points from ten games. They will travel to Churchill Brothers on the 19th of February while for Punjab it’s an away game to Gokulam.