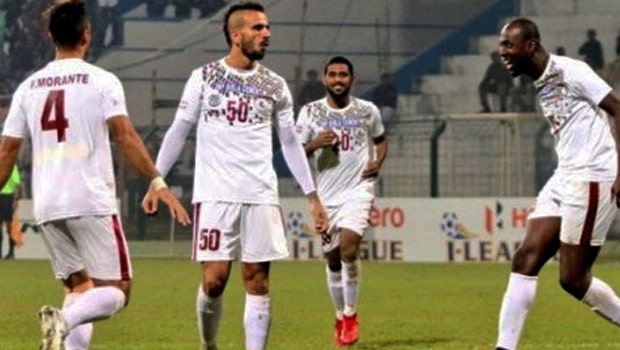 Mohun Bagan’s impressive run of form in the I-League was on Tuesday halted when the team drew away to Minerva at the Guru Nanak Stadium in a round 6 encounter.

Bagan who tops the league with 14 points from 7 games despite having played one game less had won its last four games on the trot with their last loss coming on the 8th of December against Churchill Brothers at home in a 4-2 scoreline.

Minerva on their own part also haven’t lost in their last six games before the table-toppers visit although 5 of those results were draws with 2 wins coming against India Arrows and Chennai City.

In fact, Minerva has only won once in their last five including Tuesday’s result against Bagan, but they are now second on the log with just three points away from the top spot.

Seasoned Cameroonian striker Dipanda Dicka gave the hosts the lead in the first half, and they almost clinched a win before young Subha Ghosh snatched an equalizer late in the match.

Punjab got into the lead in the 20th minute of the game through 30-year-old Cameroonian striker Dipanda Dicka who scored from a Samuel Shadap assist.

In a match that was majorly intriguing and full of chances, Mohun Bagan were incessant in attack, but the hosts managed to stay in the lead till the end of the first half.

They would somehow consider themselves unlucky as, with just two minutes left on the clock, youngster Subha Ghosh equalized for the league leaders and break the hearts of the home fans with his third goal in his debut season in the top flight.

Up next for both teams include a home tie for Mohun Bagan on the 19th of January against East Bengal while Minerva hosts Gokulam.

In the other I-League game played on Tuesday, it was a 1-0 win for NEROCA against Real Kashmir.