I-League: Mohun Bagan Just A Win Away From Title 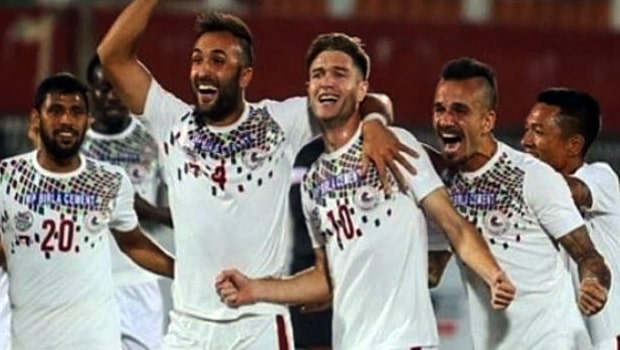 I-League leaders Mohun Bagan will be confirmed Champions of the 2019/2020 season should they get the desired result against Aizawl FC on Tuesday.

Real Kashmir’s single goal loss to East Bengal On Monday meant that Bagan was on the cusp of lifting the title and they will have the opportunity to do so against the former champions.

Should Mohun Bagan win on Tuesday, it will be the second time in five years that the team will win the title and this time, they do so with four more games left.

On Monday in Srinagar East Bengal, from Spaniard Victor Perez’s goal from the spot in the 94th minute, beat home team Real Kashmir in a game that had 4 red cards issued to both sides in total.

Real Kashmir’s Bhat Farooq got the first marching order in the 37th minute for a second bookable offence while Robin Singh was sent off in the 80th minute despite not being on the pitch.

However, Kallum Higginbotham and Edmund Lalrindika also got the marching orders late into stoppage time.

Meanwhile, Mohun Bagan lead the I-league with 36 points from 15 games, 13 points more than second-placed East Bengal who have one game more.

Mohun Bagan is currently unbeaten in its last 5 games played with 4 wins and a draw while Aizawl in its last 5 has 2 wins, 2 draws and a loss.

On the log, Aizawl are 9th with 16 points from 14 games played with two games outstanding. However, Aizawl hasn’t beat Mohun Bagan in their last 5 games played between both teams.

Nevertheless, Mohun Bagan has only won the twice in that period with rest ending in draws.

In the other game on Tuesday, NEROCA will host Punjab.