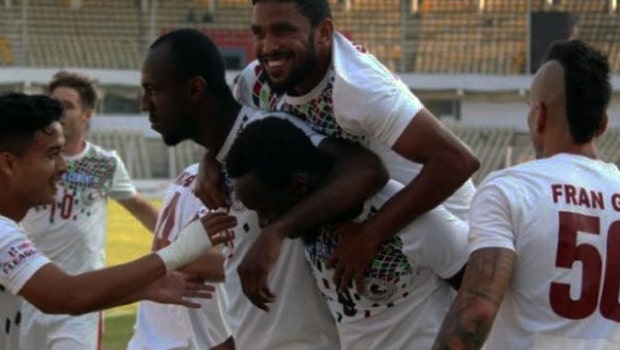 Mohun Bagan, on Tuesday, secured their second I-League title in their history after beating Aizawl 1-0.

The title is the last the team will win after being secured by Atletico De Kolkota this season and thus will be a part of the Indian Super League from next season.

Babacar Diawara’s scored a fine 80th-minute effort to secure victory at the Kalyani Stadium to put them at 39 points from 16 games.

This means that the team has 16 points more than East Bengal, who are in second with just four games left in the season.

With the target well set out before the start of the game, Bagan were expected to take the bull by the horn, but the first half was drab, and lack goal scoring chances as both teams failed to test each other.

However, the home side had a big opportunity to go into the break with the lead when Komron Tursunov was put through by Diawara into the box, but the Tajikistani turned his shot wide just moments before half time.

The struggle for an opener continued in the second half, mostly from Bagan, but the defensive duo of Joseph Adjei and Richard Kasagga for Aizawl frustrated Bagan’s attacks.

Nevertheless, an opening goal came ten minutes from time for Mohun Bagan. It came when Spanish Midfielder Joseba Beitia sent Senegalese striker Diawara through, and he scored his tenth goal of the campaign to seal all three points and indeed the league title for Mohun Bagan.

The win came in front of a packed 17,000 Mohun Bagan faithful which Aizawl, former I-League Champions, were never intimidated by.

It is the second time Mohun Bagan will win the title after their 2014/2015 feat while they imitated the record of 2009/2010 Champions, Dempo SC of Goa, of winning the league with the maximum number of four games left to play.